Ampere Analysis: VMSOs pose bigger threat to pay-TV market than SVOD providers | Media Analysis | Business | News | Rapid TV News
By continuing to use this site you consent to the use of cookies on your device as described in our privacy policy unless you have disabled them. You can change your cookie settings at any time but parts of our site will not function correctly without them. [Close]

For years, the US pay-TV market has been looking over its shoulder at a burgeoning over-the-top (OTT) sector, but research from Ampere Analysis is suggesting that the industry should pay as much heed to Virtual Multiple Systems Operators (VMSOs). 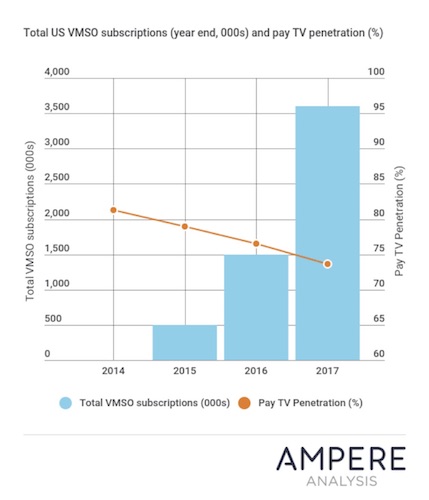 In its new study, Ampere predicts that 3.5 million so called skinny subs in the US will be streaming multiple broadcast channels by the year end as more consumers transition to OTT services. If this comes to pass, it is something Ampere asserts will undercut what it calls the ‘beleaguered’ satellite and cable operators. Indeed, the analyst regards VMSOs — principally Dish Network’s Sling TV, AT&T’s DirecTV Now, Sony’s PlayStation Vue, Google’s YouTube TV and Hulu’s Live TV — as more direct competitors to traditional cable and satellite TV providers than services like Netflix and Amazon.

Ampere sees the addressable market for VMSOs is already large: it noted that in 2016, 60% of US broadband households had Internet speeds of 10Mbps or more, the minimum recommended speed for most VMSOs. By contrast, cable, satellite and IPTV services continue to struggle. Household penetration dropped below 80% in Q3 2015 in the US and continues to decline, reaching 76.5% at the end of 2016. Ampere Analysis forecasts that pay-TV penetration will drop below 70% before 2020. More worryingly, recent Ampere research found that almost half (48%) of US Internet users agreed that they could see their household no longer watching broadcast TV in the next five years.

The report concluded that VMSOs represent a burgeoning new market that many organisations are sizing up with traditional MSOs such as Comcast and CenturyLink seeing the opportunity to expand beyond their existing infrastructure and footprint to reach new consumers. “Longer-term, we believe that the rapid growth in the VMSO market will offset the continuing decline in traditional pay-TV subscriptions,” commented Ampere Analysis analyst Toby Holleran.

“But it’s not all good news for channel owners as VMSOs’ focus on low cost means that many smaller thematic channels are left by the wayside. We also expect the competition from VMSOs to push down pay-TV pricing and have particular effect on those operators who don’t own their own broadband infrastructure – so are unable to adapt broadband and bundle pricing to compensate for decreasing TV ARPUs.”