Linear TV, digital video ad models come closer as premium video unification advances | Ad Tech | News | Rapid TV News
By continuing to use this site you consent to the use of cookies on your device as described in our privacy policy unless you have disabled them. You can change your cookie settings at any time but parts of our site will not function correctly without them. [Close]

The TV industry has never been closer to seeing true unification in premium video, according to the Q1 2017 Video Monetisation Report (VMR) from advertising management solution provider FreeWheel. 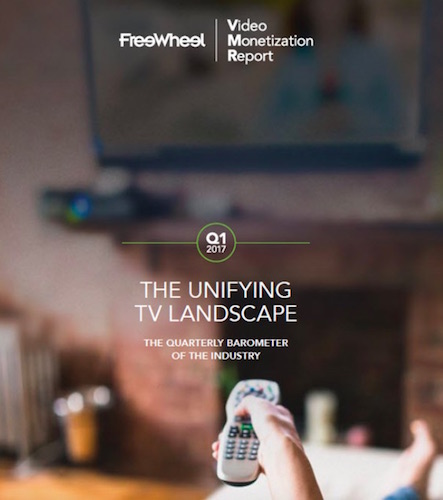 The report reveals that overall, video monetisation from live streams that mirror linear TV is increasing, with, for the first time, over-the-top TV (OTT) surpassing desktop as the largest platform where premium video is consumed in the US. The latter makes up 32% of ad view composition, although it is still lagging in Europe at 19%.

That said, the report notes that Europe has seen the true arrival of live video monetisation via digital ad insertion, in a marketplace traditionally dominated by on-demand full episodes. Much of this growth, says FreeWheel, is driven by live events, with monetisation on clips seeing 29% growth, as broadcasters use content teasers to expand their audiences and retain viewers. The study also showed a 79% growth in video starts in Europe in the first three months of the year, while ad views grew by 17%. Almost a quarter of all European video transactions were conducted through programmatic channels, suggesting broadcasters are more willing to automate the trading process than their US counterparts

The survey also revealed that premium video ad views continue to rise on smartphones in Europe, increasing 29% year-on-year, and also on tablets (up 66%). Despite concerns around ad experience, mid-roll completion rates for premium full-episode and live content at 98% and 97% respectively.

“The latest VMR highlights how the lines between traditional TV and digital video continue to blur, particularly because of the continued growth of live streaming consumption,” commented FreeWheel International MD Thomas Bremond. “Despite the differences between the US and European markets, the double-digit growth of ad views in both regions is truly impressive, and indicative of the importance of premium video across the advertising industry.”