Saudi sets pace for online, mobile video | Media Analysis | Business | News | Rapid TV News
By continuing to use this site you consent to the use of cookies on your device as described in our privacy policy unless you have disabled them. You can change your cookie settings at any time but parts of our site will not function correctly without them. [Close]

Saudi Arabian internet users top the list for accessing TV and video content online and viewing that content on their smartphones and tablets according to a 13-country study by Ampere Analysis. 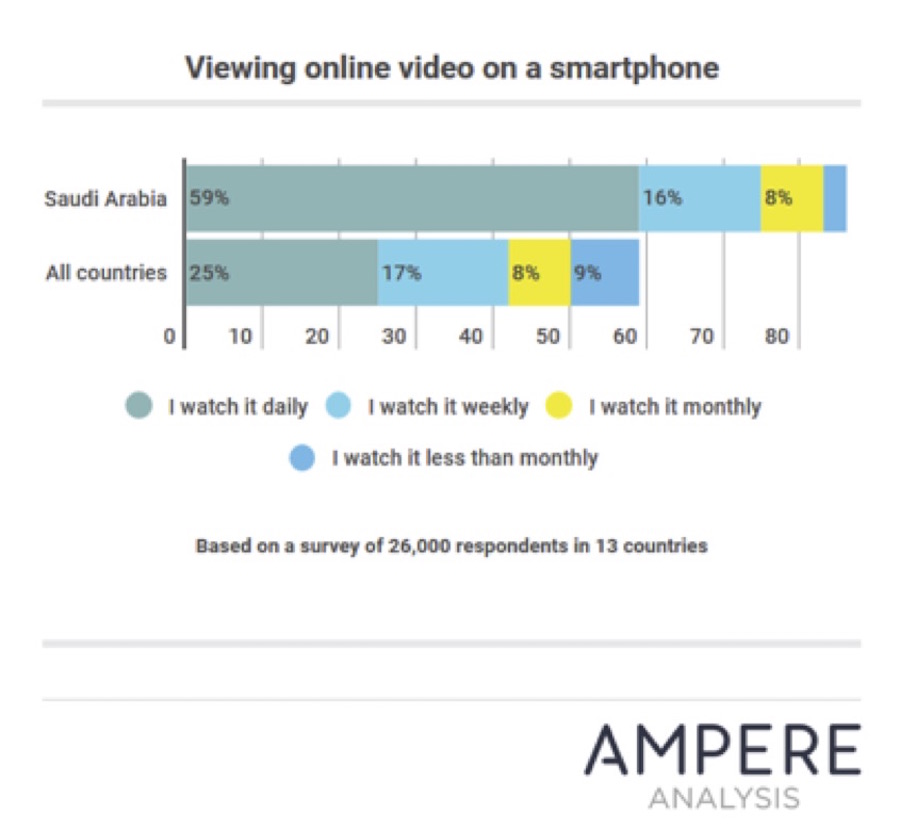 One of the key drivers of such uptake is the fact that tablet ownership is high in the KSA and also the growing popularity of social video. YouTube tops the list of video services viewed in the past month, having been watched by 81% of Saudis versus an all-countries average of 66%. The number of Saudi Arabians watching videos on Facebook is also high at 53% versus an average of 32%. Saudis are almost three times more likely to view video on Snapchat versus the survey average (29% versus 10%). They are twice as likely to use Instagram for video (37% versus 16%).

Consumption of online video in KSA is steady throughout the day in comparison with global viewing trends. Saudis are more likely than average to view video content on smartphones and tablets from the moment they wake up until they turn off at night.

In another interesting development, and unique to the country, the survey also discovered that internet households in Saudi Arabia are more likely to have subscription video-on-demand (SVOD), 48% of people, rather than pay-TV (38%). Yet despite the obvious appetite for online video, Netflix and Amazon have yet to make much of an impact, with social media platforms and local players such as MBC’s Shahid important to consumers. In the report, Saudi Arabians were found to be less than half as likely to have watched Netflix than viewers in other countries. It’s the same picture for Amazon Prime, which has only recently launched in the country.