Netflix doubles subs in Spain | VOD | News | Rapid TV News
By continuing to use this site you consent to the use of cookies on your device as described in our privacy policy unless you have disabled them. You can change your cookie settings at any time but parts of our site will not function correctly without them. [Close] 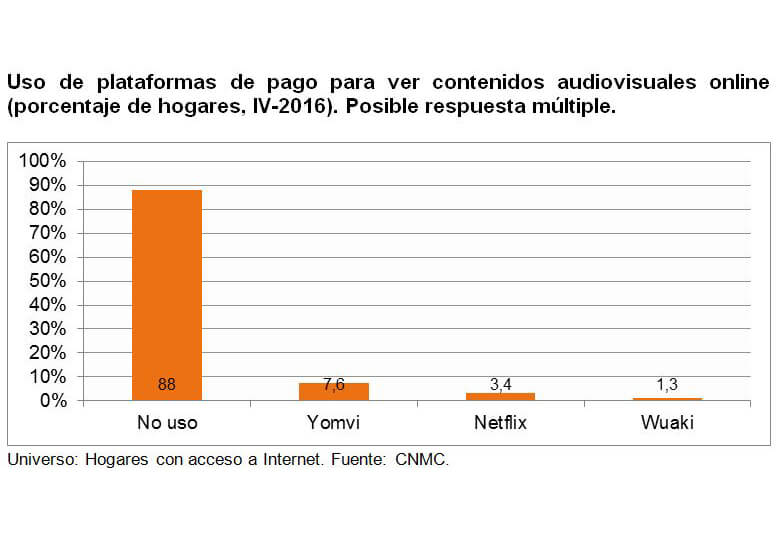 Although Netflix has not revealed its local subscription figures, a report by the Comisión Nacional de los Mercados y la Competencia on Spanish online habits shows that the streaming platform is already used by 540,000 homes.

In the last survey, published in November 2016, the CNMC said that the over-the-top (OTT) service was available in 1.8% of Internet homes.

Netflix is the only SVOD player reporting growth in the last six months. The market’s most used service, Movistar’s Yomvi – which is bundled to pay-TV subscriptions – is used by 7.6% of homes (7.4% six months ago), and Wuaki.tv, the third most used option, is available in 1.3% of homes (1.1% in November 2016).

Other SVOD services recently launched in the country, such as HBO España and Amazon Prime Video, are not currently included in the CNMC survey.

Despite the growth of SVOD as an entertainment option, figures show that 88% of Internet homes don’t pay for it. However VOD has conquered Spanish households, with free services delivered by free-to-air (FTA) channels gaining penetration in recent months. Atresmedia’s Atresplayer is the most used option, with 46.6% of Internet users watching content on it, followed by RTVE.es (39.3%) and Mediaset’s MiTele (37.6%).
Tweet