Roku reveals key trends for Streaming Day | Media Analysis | Business | News | Rapid TV News
By continuing to use this site you consent to the use of cookies on your device as described in our privacy policy unless you have disabled them. You can change your cookie settings at any time but parts of our site will not function correctly without them. [Close]

Friends and humour prevail over lovers and politics, and good TV shows are more commonly suggested than travel tips and restaurants. These are among the standout findings in a survey of streaming recommendations by Roku. 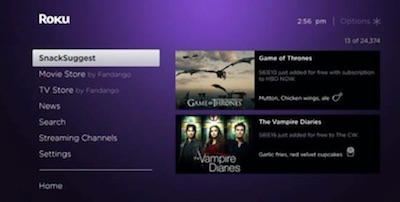 Released to celebrate Streaming Day on 20 May, the survey sought to find who and what influences people most when it comes to deciding what to watch. “Consumers globally seem to be viewing more content than ever before,” explained Abby Reyes, streaming expert at Roku. “Before the advent of streaming, viewing decisions were limited more by scheduling, locality and familiarity. Now, we trade recommendations with a vastly wider circle to help us find what to watch. Although we love our spouses, we’re not always in love with what they want to watch. Instead, we may look to those who have a similar sense of humour to help us choose our next movie or TV show.”

The survey revealed that 56% of respondents said adverts suggesting television content influenced what they watch. Millennial respondents aged 18-34 were influenced primarily by adverts for programmes and movies (54%), closely followed by online news stories about shows (47%) and recommendations made on Facebook (46%). Twitter and Snapchat proved to have less influence on what people choose to watch, with 29% and 20% respectively saying these channels influence their decisions.

UK respondents were more open to sharing recommendations on TV shows (29%) and movies (27%) than restaurants (10%) or travel (8%), while Roku also found that nearly 43% of Brits trusted friends and only 17% would trust a partner for movie and TV recommendations.