Global pay-TV subs to break billion barrier by 2018 | Pay-TV | News | Rapid TV News
By continuing to use this site you consent to the use of cookies on your device as described in our privacy policy unless you have disabled them. You can change your cookie settings at any time but parts of our site will not function correctly without them. [Close] 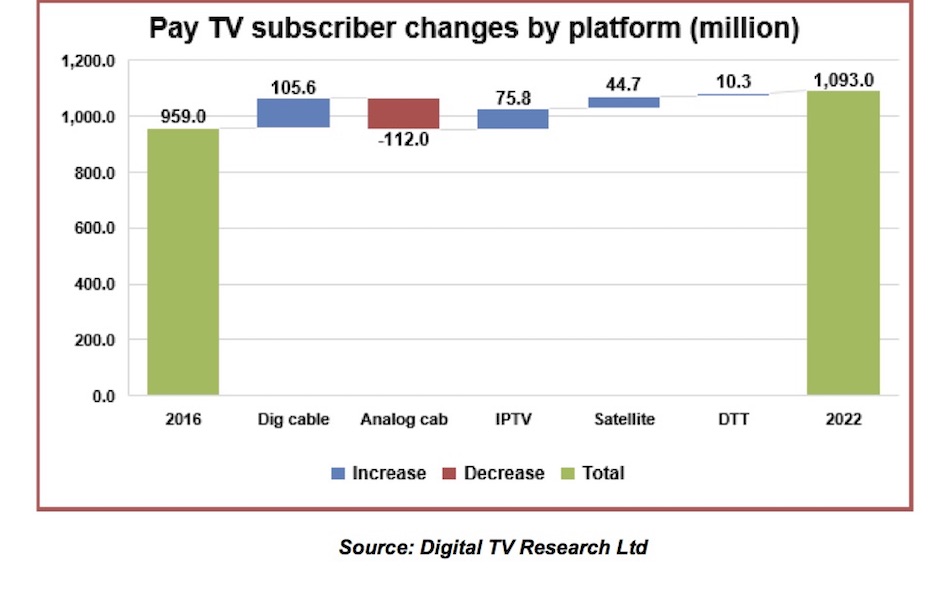 A survey from Digital TV Research has found, to paraphrase Mark Twain, that reports of the death of pay-TV are greatly exaggerated, finding that the sector is set to add 134 million subs in the five-year period to 2022, taking the total to 1.09 billion.

The Global Pay-TV Subscriber Forecasts report, based on forecasts for 138 countries, concludes that excluding analogue cable TV, the growth for digital pay-TV is ‘really impressive’ – rocketing from 380 million subscribers in 2010 onto 852 million at the end of 2016 and 1.088 billion by 2022.

“Doom-mongers in the US have been predicting the demise of pay-TV for some time. Although the US is losing pay-TV subs, there is still a lot of life left in the sector,” commented Simon Murray, principal analyst at Digital TV Research. “We believe that the worst of the losses in now over for North America, with ‘only’ five million fewer subscribers forecast between 2016 and 2022. Furthermore, they are ignoring the rest of the world.”

Indeed, looking at the regions, the report calculated that the Asia Pacific area will add 92 million subs between 2016 and 2022 – and Sub-Saharan Africa will double its total. China is set to continue to supply about a third of the world’s pay-TV subscribers. India will bring in another 16% of the total by 2022. Therefore, China and India together will provide nearly half the world’s pay-TV subscribers.

Overall, Digital TV Research believes that pay-TV subscriber counts will double in 26 countries between 2016 and 2022, but that the numbers will fall a further 18 countries.
Tweet