More than half of cord-cutters cancel legacy service in the last two years | Media Analysis | Business | News | Rapid TV News
By continuing to use this site you consent to the use of cookies on your device as described in our privacy policy unless you have disabled them. You can change your cookie settings at any time but parts of our site will not function correctly without them. [Close]

Research from The Diffusion Group (TDG) has found that 52% of cord-cutters cancelled their legacy pay-TV service in the two calendar years of 2015 and 2016, a third of these in 2016 alone. 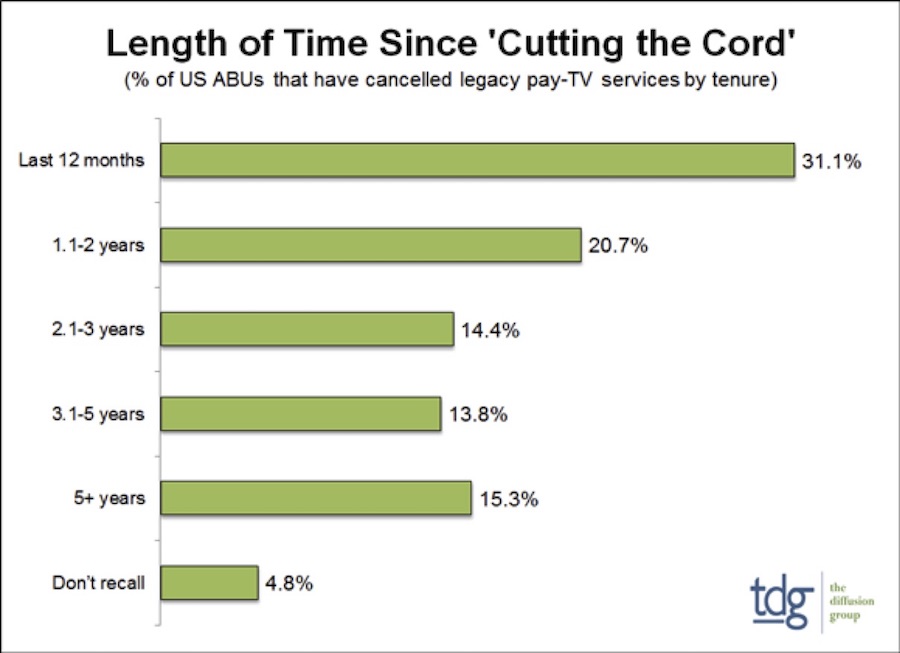 TDG's new report, Life Without Legacy Pay-TV: A Profile of US Cord Cutters and Cord Nevers, found that the uptick in cord-cutting is due to several factors that it had noted nearly a decade ago, including high prices and the rise of on-demand services. TDG expects the threat of cord-cutting will continue to haunt operators for some time, even as video ARPU among existing subscribers falls.

The report fundamentally suggests that the use of on-demand streaming services like Netflix and Amazon Prime has gone mainstream, triggering most legacy subscribers to reassess the value of traditional TV services. Secondly, TDG believes that video streaming has evolved to include a growing variety of live linear services that mirror in many ways the offerings of legacy providers but are customized to the needs of individual viewing segments.

“Spending $70+/month for service that provides 2X value seems odd when you can pay $10/month for a service with 1X value,” noted TDG co-founder and principal Michael Greeson. “The calculus of today's TV subscriber has been radically altered by the presence of SVOD services like Netflix. Whether from independents (Sony Vue, YouTube TV, Hulu) or from incumbents (DirecTV Now, Dish's Sling TV), consumers now have greater flexibility in deciding for which channels they receive and pay.”

In the report TDG also states that most pay-TV incumbents, with the exception of Comcast, are rushing into what it calls a skinny-bundle trap that it regards as a race to the bottom in terms of price and selection to save subscribers. Many, the analyst argues, do not understand the long-term consequences of this strategy.

"Market conditions are challenging, but many incumbents are blindly hastening the pace at which the value of robust fully-priced TV packages declines,” Greeson added. “TDG observed long ago that incumbents were going to have to make a choice: either resign themselves to being a 'dumb-pipe' provider, or invest in using IP, change the TV experience, and become the go-to source for all things video. Comcast tuned into the later, investing in the hardware and software required to bring the power of IP to the legacy TV experience. The company is now gaining video subscribers when others are reporting losses.”