Suzuki kicks off ad push with Channel 4 | Ad Tech | News | Rapid TV News
By continuing to use this site you consent to the use of cookies on your device as described in our privacy policy unless you have disabled them. You can change your cookie settings at any time but parts of our site will not function correctly without them. [Close]

UK independent media agency the7stars has forged a new partnership for Suzuki together with Channel 4 and content agency The Outfit in the UK. 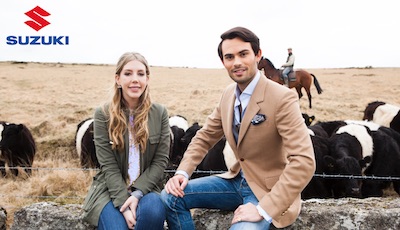 The idea is to appeal to a younger audience in support of the manufacturer’s latest model, the Suzuki Ignis. Launching across TV and digital, the creative campaign #IgnisAdventure has been filmed in the style of a mini content series that rolls out in May airtime within Channel 4 and E4’s peak time schedules.

The first 60-second spot will be revealed during a premiere break in Channel 4’s Friday night hit show Gogglebox on 12 May. Alongside the TV spots there will be a complementary influencer campaign to boost a social media drive.

The TV ads follow the adventure of comedienne Katherine Ryan and Made in Chelsea star Mark Francis as they are dropped at an undisclosed location and tasked with finding their way back to the comforts of home in a Suzuki Ignis, with only each other for guidance.

Alongside the TV spots, Suzuki will be releasing updates of the #IgnisAdventure story on its social channels, including behind the scenes clips, with a teaser being released on 11 May. The stars will also reveal exclusive content through their own social channels. And, Suzuki will challenge the two influencers, Grace Bruce and Lucy Wyndham Read, to mirror the TV spots by documenting their own #IgnisAdventure, which will be shared on Suzuki’s social media networks, as well as their own.

“Our new model, the Suzuki Ignis, is small and mighty but packed with personality,” said Jodie Brooke, communications manager, Suzuki. “As such, we want to appeal to a wider audience, expanding from family fun to engage with not just a younger audience, but one with a keen sense of adventure. Who better to demonstrate this than two of the biggest personalities on Channel 4 and E4?”

Rachel Courtney, head of partnerships at the7stars, added: “We’re really excited about the launch of the #IgnisAdventure series. It’s an innovative collaboration between partners that allows us to showcase the new model in a humorous and shareable way.”