Sports Illustrated debuts Capturing Everest in VR | Programming | News | Rapid TV News
By continuing to use this site you consent to the use of cookies on your device as described in our privacy policy unless you have disabled them. You can change your cookie settings at any time but parts of our site will not function correctly without them. [Close]

Time Inc’s Sports Illustrated and LIFE VR, in partnership with Endemol Shine Beyond USA, are premiering Capturing Everest this week, the first-ever complete ascent of the world’s tallest mountain in virtual reality (VR).

The first-of-its-kind series launches on LIFE VR — Time Inc’s dedicated virtual reality platform — in concert with comprehensive coverage across SI’s print and digital properties, including a microsite on SI.com with 360° video versions of the episodes and a cover story in this week’s issue. This also marks the first-ever augmented-reality issue from SI, allowing users to scan select images in the magazine to instantly activate multimedia content on their mobile device using the LIFE VR app. 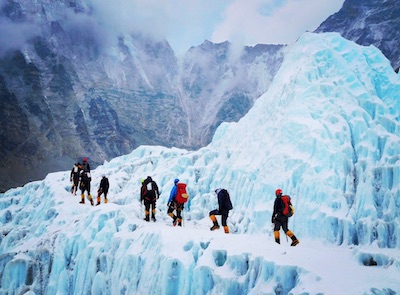 The production is presented in a series of four episodes following the harrowing journey of three climbers with uniquely inspiring back stories as they attempt to reach the top. One of these climbers is Jeff Glasbrenner, a Paralympian and 25-time Ironman who became the first American amputee to summit Mount Everest on this expedition. The other two climbers featured in the experience are Lisa Thompson, a breast cancer survivor who quit her job to take on Everest, and Madison Mountaineering guide Brent Bishop, son of the legendary climber Barry Bishop, a member of the first American team to summit Everest, in 1963. The VR experience is presented in four chapters: The Journey, The Blessing, The Icefall and The Summit.

The Editors of SI write of the project: “It was no ordinary expedition, and it was captured in an extraordinary way .... You've seen photos and video from the peak. But you've never felt Everest like this ... Capturing Everest is yet another example of how SI is delivering the access and storytelling for which we’ve always been known in cutting-edge ways — and it’s the jumping-off point for a new idea of what a magazine can be.”

Capturing Everest was shot on location over a two-month span last spring, which was the first climbing season on the mountain after two years of cancellations due to bad weather and safety concerns. The team of climbers employed a variety of 360° video capture methods while enduring some of the planet’s most extreme conditions. Specialised cameras rigged to zip lines and body harnesses on the climbers offer first-person views of Mount Everest in unprecedented fashion to make cinematic history with the production.

“We are thrilled that Capturing Everest is getting this amazing launch platform thanks to our partners at Sports Illustrated and LIFE VR,” said Bonnie Pan, president, Endemol Shine Beyond USA. “This is such a special series, featuring an amazingly brave team of climbers who captured a view of Everest that has never been seen before.”