Western Europe pay-TV market passes 100MN subs | Media Analysis | Business | News | Rapid TV News
By continuing to use this site you consent to the use of cookies on your device as described in our privacy policy unless you have disabled them. You can change your cookie settings at any time but parts of our site will not function correctly without them. [Close]

Unlike what has been happening in North America, the chill winds of cord-cutting will not be blowing through the Western European pay-TV industry for at least another five years, says a report from Digital TV Research. 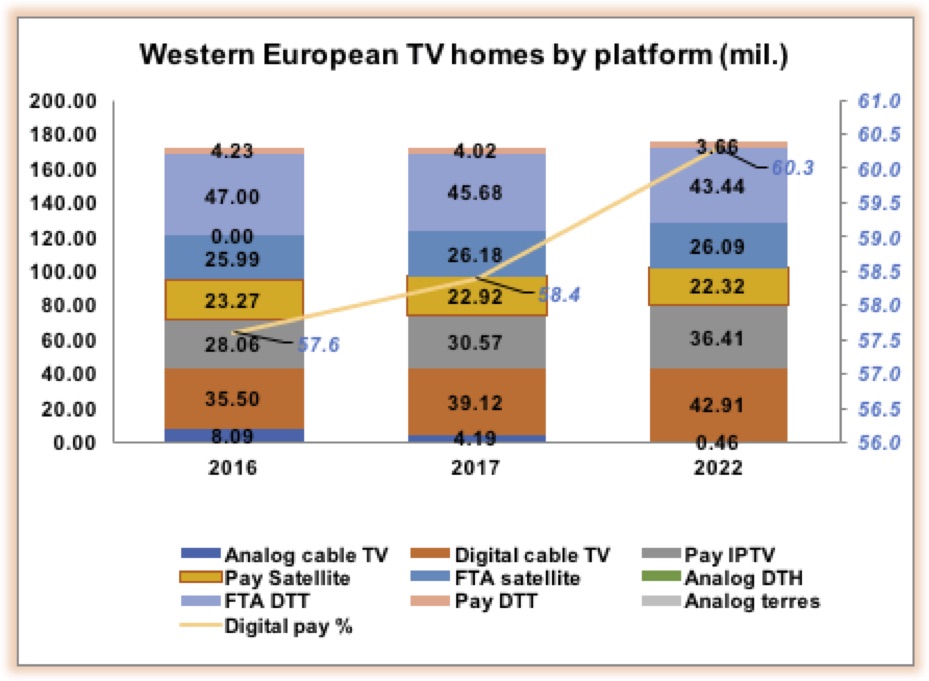 The analyst found that the Western European pay-TV market is set to gain 7 million subscribers between 2016 and 2022, a rise of 6.7%, taking the total to 106 million. The landmark 100 million barrier is likely to be passed in June 2017. Digital TV Research believes that much of the subscriber growth will come from countries with traditionally low pay-TV penetration: two-thirds of the region’s net additions are predicted to come from Italy (up by 1.47 million or 20% between 2016 and 2022); Spain (up 1.36 million or 23%); and France (up 1.41 million or 11%). Subscriber growth will be lower than 3% for eight of the 18 countries covered in the Western Europe Pay TV Forecasts report.

In terms of platforms, the report suggests that IPTV will add more than eight million subscribers between 2016 and 2022, but satellite-based pay-TV will lose nearly a million subs. Digital cable TV is set to gain 7.4 million subs, but analogue cable will shed almost exactly the same number. Pay-DTT will drop by 567,000 subscribers.