Chinese mobile video sector soars | Media Analysis | Business
By continuing to use this site you consent to the use of cookies on your device as described in our privacy policy unless you have disabled them. You can change your cookie settings at any time but parts of our site will not function correctly without them. [Close]

Research from eMarketer has found that China will have more than 435 million mobile video viewers in 2017, the rapid growth driven by what the researcher says is a seemingly insatiable demand for content and services. 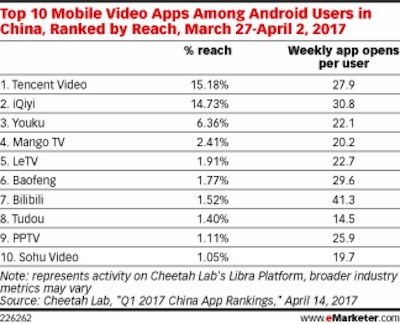 The research, based on data from Cheetah Lab, reveals a highly competitive mobile video sector whereby the top provider, Tencent Video, has just a 15.1% share of the market, closely followed by Baidu-owned iQiyi which claims only half a percentage point less. These two are some way ahead of third-placed Youku (6.36%), which is followed by Mango TV (2.41%) and leTV (1.91%).

Cheetah Lab also found that the country’s top video platforms are rapidly shifting their business models away from advertising and toward subscriptions. While subscriptions made up only 3.4% of digital video revenues in 2011, it expects that proportion to rise to nearly a quarter of all video proceeds by the end of 2017.