NAB 2017: FreeCast focuses on ATSC 3.0 opportunity | Mobile | News | Rapid TV News
By continuing to use this site you consent to the use of cookies on your device as described in our privacy policy unless you have disabled them. You can change your cookie settings at any time but parts of our site will not function correctly without them. [Close]

As part of its strategy to offer customers the opportunity to have pick and pay à la carte premium channels, FreeCast plans to deliver a competitive pay-TV experience over-the-air using the new ATSC 3.0 standard. 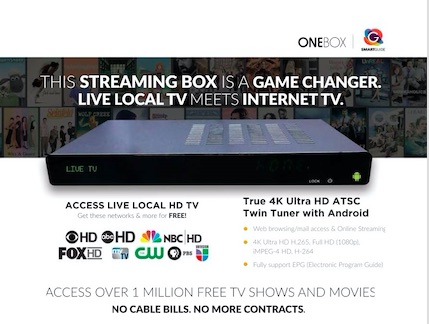 Explaining the rationale for the move, the online video firm says that to date consumers have been forced to choose between a few dozen channels of varying reception with an HDTV antenna or hundreds of cable networks via costly cable and satellite subscriptions. Yet it adds that the new ATSC 3.0 standard opens up the opportunity to launch hundreds of networks, including pay channels, over-the-air.

FreeCast's soon to be launched ONE set-top box (STB) product is slated to play a key role in this offering, adding elements of the current pay-TV experience to a next generation broadcast line-up. It will offer an interactive programming guide for this over-the-air content, and a platform for over-the-top (OTT) content including films, TV shows, Web channels, live events, radio stations and music videos.

“We're at a point where cable and TV don't have any need for each other. Increasingly, that cable into your home is a pipe for Internet service,” explained FreeCast CEO William Mobley. “ATSC 3.0 is exciting because it's going to allow us to deliver a very complete TV experience wirelessly. It's over-the-air just like your antenna TV today, so it's not clogging your bandwidth. This means that a consumer needs only an HDTV antenna, our ONE box, and basic internet service. It's an extremely low cost formula for TV service that doesn't skimp on features or convenience.”