‘Fake news’ fears drives mistrust in TV news outlets | Media Analysis | Business | News | Rapid TV News
By continuing to use this site you consent to the use of cookies on your device as described in our privacy policy unless you have disabled them. You can change your cookie settings at any time but parts of our site will not function correctly without them. [Close]

Thanks to the zeitgeist of recent elections, Brexit and now the Trump administration in the US, fake news has become both a real phenomenon and a groundless insult, affecting attitudes towards and ratings for television news. 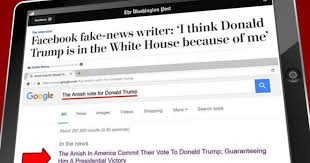 A study from customer experience expert Network Research shows that public trust in the reliability of media information has declined significantly in UK in the last 12 months.

The term “post-truth” was the Oxford Dictionary’s word of the year for 2016. As fake news becomes a staple talking point at every major event in the UK, US and beyond in 2017, a third of respondents said their trust in the reliability of information presented by media outlets had reduced since the start of 2016. Almost half of the public are suspicious they may have seen or read fake news recently. Having suspected fake news, 75% of those people trust the outlet less as a result.

When it comes to political affiliations, 23% of people that say they voted Conservative in the 2015 General Election in the UK claimed a reduction in trust, compared with 37% of Labour Party supporters and 43% of UKIP supporters. Also, about 39.5% of respondents feel the government has significant influence on the media agenda and 32% feel businesses have significant influence on the agenda.

Over 83% of respondents believe there should be greater penalties for reporting fabricated news stories, 80% agree that journalists need to check their facts more often, and 66% feel there is a “general disregard for the facts these days". Meanwhile, 63% believe the media industry needs more regulation in a ‘post-truth’ era.

The study also found that 77% regularly source news through TV and 47% through social media; about 24% stated their use of social media as source for news has increased over the last 12 months. Only 57% feel that traditional news sources are more trustworthy than social media sources. Around 70% of people believe social media platforms should be responsible for verifying the authenticity of a news story if it is being shared widely.

“The Network Research study shows that fake news has had a huge negative impact on trust in the media in the last 12 months, and rightly or wrongly, the… public lays the blame at the feet of journalists and media channels,” the report concluded.