Native display ads to spike by a third in 2017 | Ad Tech | News | Rapid TV News
By continuing to use this site you consent to the use of cookies on your device as described in our privacy policy unless you have disabled them. You can change your cookie settings at any time but parts of our site will not function correctly without them. [Close]

Native display ads to spike by a third in 2017

Native digital display ad spending in the US will grow 36.2% this year to reach $22.09 billion, according to eMarketer’s inaugural forecast. 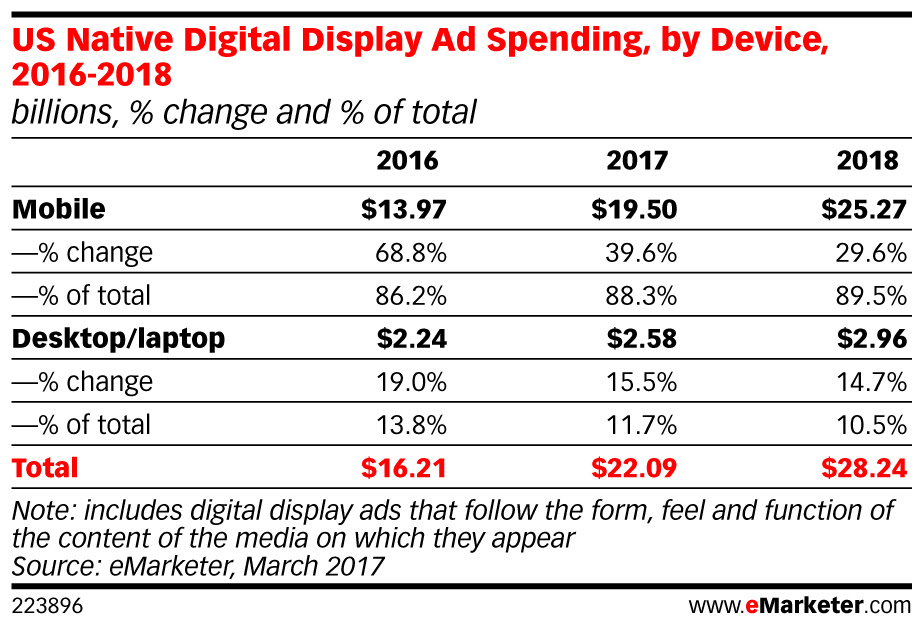 For the first time this year, native ad spending will make up more than half (52.9%) of all display ad spending in the US, the firm said.

An overwhelming portion of US native display ad spending goes to social networks, driven mainly by Facebook. This year, native social network display ad spending will reach $18.59 billion, representing 84.2% of all US native display. Importantly, social’s share of native is falling and will drop to 82.2% next year, as non-social (specifically in-feed and sponsored content) grows faster.

Since native advertising is largely purchased on social platforms, it’s also almost entirely mobile. Native mobile display ad spending will reach $19.50 billion this year, representing 88.3% of all native advertising – with that share growing. And native mobile will represent 64.5% of all US mobile display ad spending this year.

“Greater demand for native formats such as in-app rewarded video ads, and greater momentum around redesigning the mobile experience for a more in-feed and mobile-first world will also draw greater ad dollars to native inventory on mobile devices,” said Fisher.

“It’s been a slow start to enabling programmatic buying for non-social native display ads, but with the majority of buying platforms quickly moving to accommodate native ads, we see that changing in the next several months,” Fisher said.