Rise of the ‘cord nils’ as almost quarter of US broadband drop legacy pay-TV services | Pay-TV | News | Rapid TV News
By continuing to use this site you consent to the use of cookies on your device as described in our privacy policy unless you have disabled them. You can change your cookie settings at any time but parts of our site will not function correctly without them. [Close]

TDG research revealed that the proportion of US broadband households not subscribing to a legacy pay-TV service — ‘cord nils’, with zero use of TV services from cable, satellite or telco-TV providers — has more than doubled in the past five years. 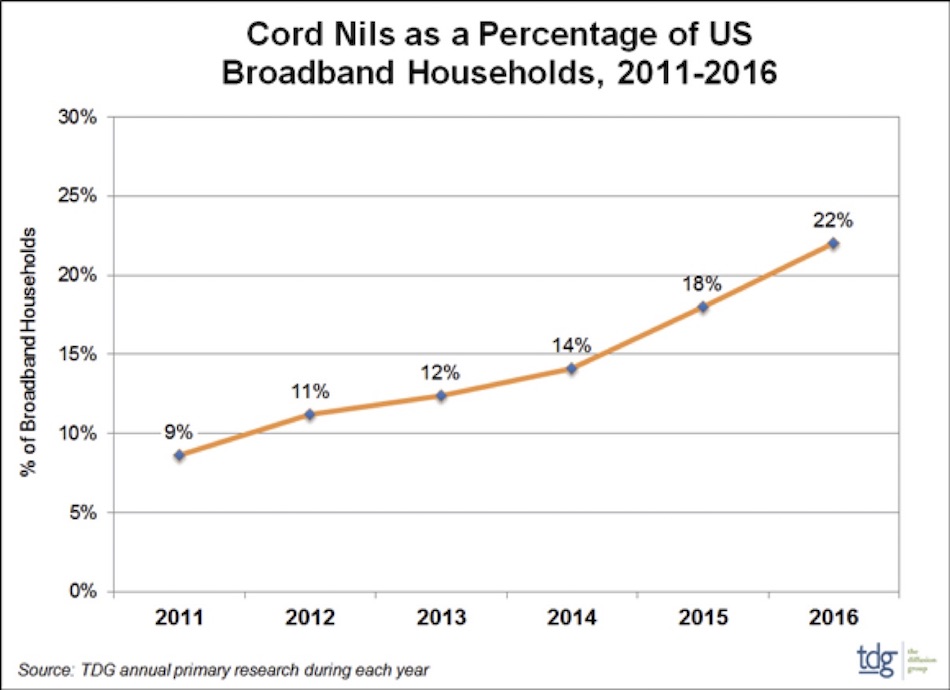 The Life Without Legacy Pay-TV: A Profile of US Cord Cutters and Cord Nevers report found that percentage of cord nils has risen 144% since 2011 as the value of the broadband/pay-TV bundle erodes. In 2011, 9% of the 85 million US broadband households qualified as cord nils, but by the end of 2016, this number surpassed 100 million, with 22% qualifying. This means that the number of broadband households living without legacy pay-TV has grown from just under eight million in 2011 to 22 million by year-end 2016.

“Wall Street and the media are myopically focused on the quarterly drip of legacy pay-TV subscribers, which unfortunately overlooks a larger and more dangerous trend,” remarked Michael Greeson, TDG co-founder and director of research, and author of the report. “Where broadband (and broadband video) goes, legacy pay-TV subscriptions will increasingly decline. This is indeed what has transpired.”

Greeson added that the full extent of the disruption has been largely overlooked and has led to the rush by operators to introduce skinny bundles. Yet it also noted that except for Comcast, even before Broadband Pay-TV services gain a serious footing, already for US MVPDs, the stickiness of the Internet/TV bundle appears to be in decline.
Tweet