Connected device upsurge changing media firms’ strategies | Media Analysis | Business | News | Rapid TV News
By continuing to use this site you consent to the use of cookies on your device as described in our privacy policy unless you have disabled them. You can change your cookie settings at any time but parts of our site will not function correctly without them. [Close]

Driven by the fact that 80% of them have broadband Internet, US households are turning to TV-connected devices in droves, with both penetration and time spent using them increasing, says measurement firm Nielsen. 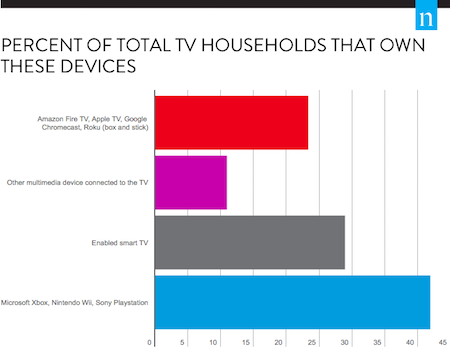 Nielsen found the popularity of products such as Roku (box and stick), Amazon Fire TV, Apple TV and Google Chromecast, as well as game consoles, was growing. It added that their combination with broadband was having a meaningful impact on how people view and engage with content on the TV set, and was consequently changing the ways in which media companies provide services.

Nielsen’s analysis found that currently just over 23% of TV homes own a digital streaming device such as an Amazon Fire TV, Apple TV, Google Chromecast or Roku, up from 19% in June 2016. Roku and Apple TV have the highest household penetration, followed by Amazon Fire TV and Google Chromecast. In addition to the four brand-specific devices, nearly 11% of homes have streaming players from other brands and PC/tablets/smartphones connected to their television sets. The analyst also discovered that enabled smart TVs function like multimedia devices that are built into the television sets, and they can be found in 29% of all US TV homes, up from 22% in January 2016.

In January 2017, 18%, or 21 million homes, used an Amazon Fire TV, Apple TV, Google Chromecast or Roku for an average of almost 15 days a month. On the days that these devices were used, viewers in these homes spent more than three-and-a-half hours using them. In January 2017, households used smart TV apps more than 20 days out of the month, and on average, they spent more than two hours per usage day tuned in to them.