YuppTV takes ETV Telugu to US | Deals | News | Rapid TV News
By continuing to use this site you consent to the use of cookies on your device as described in our privacy policy unless you have disabled them. You can change your cookie settings at any time but parts of our site will not function correctly without them. [Close]

YuppTV takes ETV Telugu to US

ETV’s Telugu is now available in the US after the Indian broadcaster entered an exclusive streaming partnership with south Asian over-the-top (OTT) video service YuppTV. 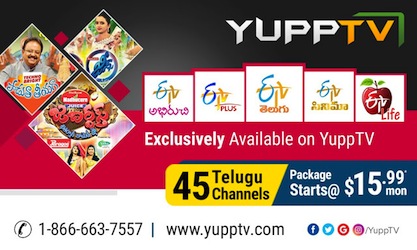 YuppTV, which in October 2016 received US$50 million funding from KKR’s Emerald Media, now boasts more than 250 TV channels, 5,000 films and 100 TV shows in 14 languages made available globally for the South Asian diaspora.

ETV Telugu, which offers shows such as Padutha Teeyaga, Jabardasth, Extra Jabadasth and Manasu Mamatha, will now be available to US subscribers to the video-on-demand (VOD) and live TV service.

“[ETV Telugu’s] entertainment content has been successful in striking the right chord with the users and we are happy to make the same available in the US markets,” said Uday Reddy, founder & CEO, YuppTV.

“It is also exciting for us to introduce in the US market other channels like ETV Life, ETV Plus, ETV Cinema and ETV Abhiruchi. We further look forward to a long-term association with channels and would always strive to surprise our users with further such engaging and entertaining associations.”

ETV Network CEO K Bapineedu added: “We have enjoyed our association with YuppTV for a while now. The decision to go exclusive on our partnership with the platform was taken due to the positive response, especially in the US market.

“Our entertainment shows have become popular over the time in the Indian expat community settled in the US. We further look forward to enhancing the reach of our entertainment content via the incredible penetration and popularity of YuppTV.”

The company’s Telugu Gold Value pack is available in the US for US$99.99 for six months or $169.99 for an annual subscription. Yupp TV’s Telugu Platinum Value pack costs $29.99 per month.