Skid Row Marathon documentary examines recovery in LA | Programming | News | Rapid TV News
By continuing to use this site you consent to the use of cookies on your device as described in our privacy policy unless you have disabled them. You can change your cookie settings at any time but parts of our site will not function correctly without them. [Close]

The upcoming documentary Skid Row Marathon will focus on one judge’s efforts to transform lives in one of the worst sections of Los Angeles. 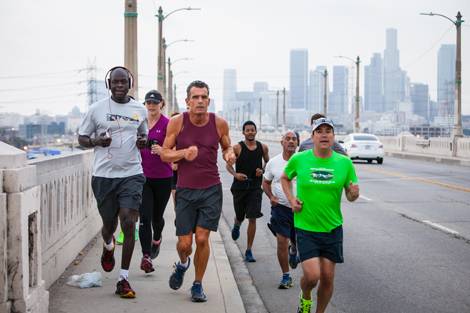 Every Monday at 6am, criminal court judge Craig Mitchell leads a running group on a six-mile run through the streets of downtown Los Angeles from Skid Row to Chinatown, and back. Together, he and the residents of Skid Row’s Midnight Mission Shelter make up an unorthodox running club.

“Any perception that people who suffer from addiction or end up on Skid Row do not possess character traits to achieve great things in their lives is an absolute misperception,” said Mitchell. “[The runners have] sustained way too much disappointment, too many dreams that have not come to fruition, and I’m not going to let this experience [of the running club] fall into that category.”

The documentary is directed by Mark Hayes and produced by his wife Gabi Hayes.

“It intrigued me because here’s this guy that, as part of his day job and daily responsibilities, is sentencing people to long sentences and life in prison,” explained Hayes, who’s been documenting the runners in this passion project for three years. “Yet, on the other hand, he’s reaching out to those same individuals to help them get back into society and be a part of the greater community. He believes in their potential.”

The film follows the runners over the course of three years as they battle with the ups and downs of addiction, and how the retreat of the club offered them a second chance.

“We’re trying to tell the story of these people as they reconnect with life, society and their own dignity. The running club has given them this second chance at life and we’re following these characters as they either succeed or fail when given this second chance,” added Hayes.