Nearly half of young millennials use ad blockers | Ad Tech | News | Rapid TV News
By continuing to use this site you consent to the use of cookies on your device as described in our privacy policy unless you have disabled them. You can change your cookie settings at any time but parts of our site will not function correctly without them. [Close]

Nearly half of young millennials use ad blockers

The adoption of ad blockers by millennials could continue to be an obstacle for advertisers targeting young people, according an eMarketer’s forecast. 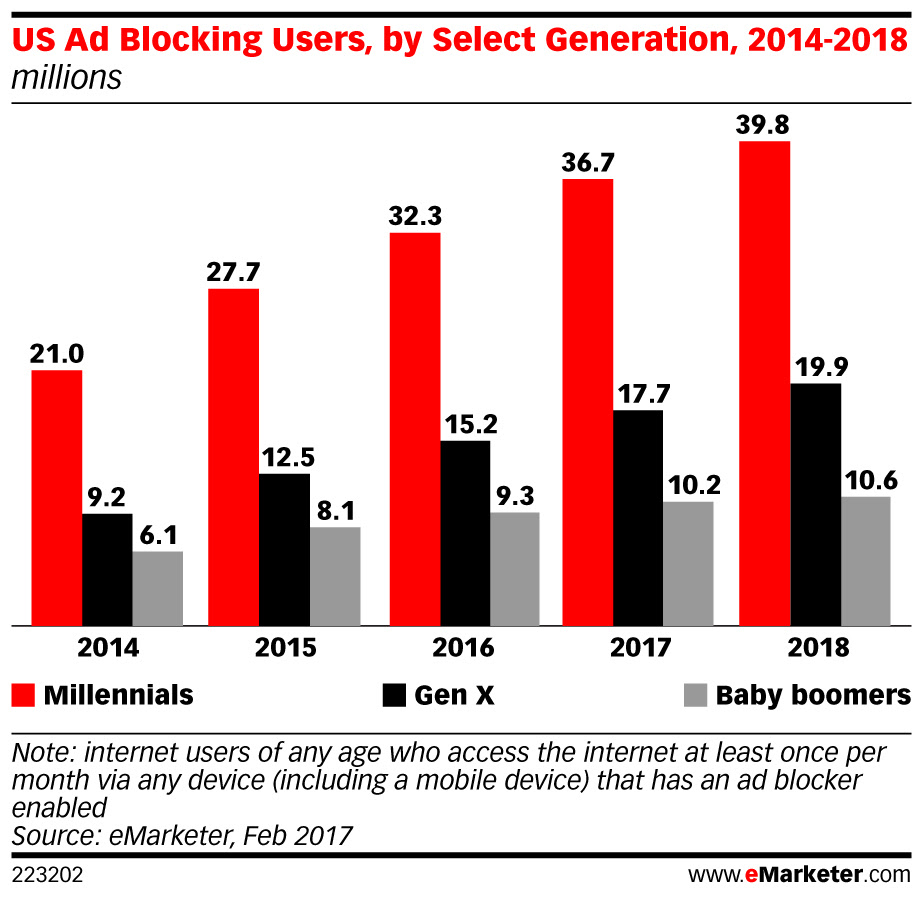 To put things in perspective, overall, usage of ad blockers in the US will grow 16.2% this year to 75.11 million users. That’s slightly lower than the 85 million forecast in June. So while overall usage is not yet widespread, eMarketer found that 36.68 million millennials (41.1% of those born between 1981 and 2000) will browse the Internet on a device that has an ad blocker enabled.

Within that generation, 18-24-year-olds are the heaviest users of ad blockers; 49.9% of them will use one (or 51% of Internet users within that age group). In the early days of ad blocking, penetration rates among 18-24-year-olds and 25-34-year-olds were similar. However, the gap is widening as the younger group adopts them in greater numbers.

“Millennials are more likely to have an ad blocker enabled than those in any other demographic group,” said eMarketer forecasting analyst Shelleen Shum. “Those in this group are more tech savvy than older adults, more willing to adopt new technology and tend to spend more time on the internet browsing and watching videos.”

There is some good news for advertisers targeting millennials. Adoption of ad blockers is still low on smartphones, where young people spend the majority of their time. That’s partly because mobile ad blockers are often not as effective on mobile, especially within apps, as they are on desktops and laptops. This year, 20.1% of Americans will block ads on desktops and laptops, while just 7.9% will do so on smartphones, even though adults spend more time per day with mobile than with desktops/laptops.

Also, publishers’ efforts to restrict content to those with ad blockers enabled seems to be working. And some publishers have made a conscious effort to switch to less intrusive ad formats.