Neglect customer experience at your peril, research warns pay-TV providers | Pay-TV | News | Rapid TV News
By continuing to use this site you consent to the use of cookies on your device as described in our privacy policy unless you have disabled them. You can change your cookie settings at any time but parts of our site will not function correctly without them. [Close]

Pay-TV operators can no longer simply rely on the strength of their content offering to maintain subscriber loyalty, but must raise their customer relationship management game to gain ground in an increasingly competitive marketplace. 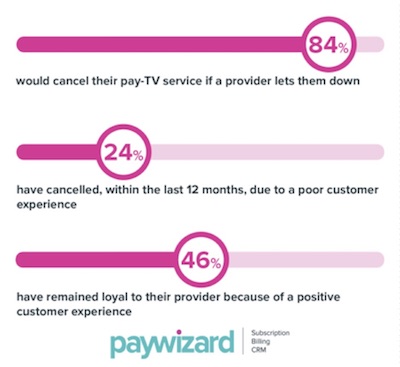 This is the top-line find of a survey of more than 6,200 consumers in Australia, Brazil, Germany, Singapore, the United Kingdom and the United States from subscription, billing and CRM specialist Paywizard. The Facing the Perils of Failed Customer Experience survey carried the warning for operators that more than four-fifths of consumers would cancel a pay-TV subscription due to poor customer experience, such as if service and support were lacking and the company seemed out of touch with their needs. Indeed, the data showed that a quarter have actually done so in the past year.

By contrast, the survey also found that almost half (46%) of consumers have retained a digital pay-TV subscription they might otherwise have cancelled because of positive customer experience. The findings show, said Paywizard, that younger consumers place greater value on customer experience when it comes to sticking with a provider. Just under three-fifths of those under age 35 say this has been a factor in keeping a service over the past year.

Nearly three-quarters of consumers who have added a digital pay-TV subscription over the past year end up increasing their overall spend on television and entertainment. On the other hand, more than a quarter still reduced total TV spend by downgrading their general pay-TV package or cutting other subscriptions – making clear that there are losers among operators that fail to build strong bonds with their customers.

To be on the winning end of consumers’ decisions regarding their TV and entertainment budgets, Paywizard advises pay-TV operators to overcome a ‘dip-in, dip-out’ attitude on the part of subscribers. The survey revealed that most consumers intend to drop some pay-TV services – for instance, cutting part of a cable or satellite package – if they take another, such as an on-demand video subscription. Almost two-thirds of those who have not taken a new subscription in the past would cut back on other digital subscriptions or downgrade a general package to bring down the cost if they were to sign up to a new or additional pay-over-the-top (OTT) service.

“We are seeing a fundamental shift taking place in the pay-TV marketplace, with customer experience emerging as critical to television service providers’ success – in many cases, their very survival,” cautioned Paywizard chief marketing officer Bhavesh Vaghela. “While content and cost are often cited as the elements influencing pay-TV uptake and cancellations, the survey findings demonstrate that customer experience has undeniably emerged as a major driver. This is particularly true for operators of OTT services, as simply relying on a decent content offering is no longer nearly enough to build loyalty to your brand. With industry projections indicating roughly a billion pay-TV subscriptions are up for grabs this year – and billions in revenue are on the line – it is clear from the research that pay-TV operators today ignore customer experience at their peril.”
Tweet