Rai makes all channels available in HD over Tivùsat | 4K/UltraHD | News | Rapid TV News
By continuing to use this site you consent to the use of cookies on your device as described in our privacy policy unless you have disabled them. You can change your cookie settings at any time but parts of our site will not function correctly without them. [Close]

Rai makes all channels available in HD over Tivùsat

Viewers in Italy of the can now benefit from HD quality for the full line-up of TV channels produced by Rai. 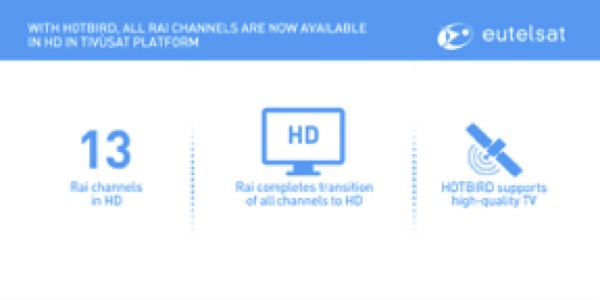 The Italian public broadcaster has completed the transition of all its channels to HDTV via the Tivùsat TV platform that broadcasts exclusively from Eutelsat’s HOTBIRD neighbourhood.

Rai YoYo, Rai School, Rai Gulp, Rai Storia and Rai News24 were the last of 13 Rai channels to transition to HD and the operation was completed with the collaboration of Rai Way. This operates the signal transmission and broadcasting network for Italy’s national public broadcaster.

Tivùsat was set up to ensure that everyone in Italy has access to free digital TV and its full line-up now comprises over 100 channels, of which 24 are in HD and 80 in standard digital, plus 33 radio stations. A total of 2.9 million Tivùsat smartcards have been activated.

Commenting on what it has done for Tivùsat, Eutelsat Italy CEO Renato Farina said: “Ensuring that all Italian TV homes can access the highest signal quality is a priority for Eutelsat. We are delighted to be part of the effort to accelerate Tivùsat’s HD offer and to take part in other exceptional ventures such as the documentary Tonight at St Peter’s hat was produced by Rai in Ultra HD and broadcast to Tivùsat homes on 27 December.”
Tweet