Half of consumers that try VR consider buying a headset | Media Analysis | Business | News | Rapid TV News
By continuing to use this site you consent to the use of cookies on your device as described in our privacy policy unless you have disabled them. You can change your cookie settings at any time but parts of our site will not function correctly without them. [Close]

Half of consumers that try VR consider buying a headset

A new market snapshot by Parks Associates reveals 50% of consumers who try a virtual reality (VR) headset enjoy it and make plans to purchase one, while 15% who try one then actually buy a headset. 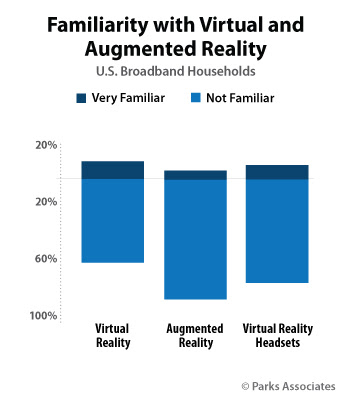 This research, from Consumer Strategies and Use Cases for Virtual and Augmented Reality, highlights the importance of personal experience in driving the success of virtual reality headset sales and the need to expand demos beyond industry events such as CES and into retail settings, especially during the holiday shopping season. At last year's CES, VR headsets and hardware drew attention, but this year, content and apps will be the focus for the technology.

"VR and AR (augmented reality) technologies have great potential but are in the very earliest stages of their market lifecycle,” said Brett Sappington, senior director of research, Parks Associates. “VR headsets have only recently entered the consumer market, and 360° and VR content production is just beginning. Content creators are still in the process of finding the best ways to use VR to tell stories and generate revenues.”

“Despite a boost in awareness in 2016, AR consumer applications remain more of an opportunity than commercial reality,” Sappington said. “Industry players must create the appropriate ecosystems for each, including platforms, software, content, distribution and delivery systems, in order for them to be viable in the marketplace."

The top use cases for VR include gaming, healthcare, live events such as concerts or sporting events, social interaction, marketing and education.

"Gaming is a strong use case for VR and AR technologies," said Hunter Sappington, research analyst, Parks Associates. "PlayStation VR, launched by Sony in October, was a high profile entry for VR, while the app Pokémon Go exposed lots of smartphone users, and news organisations, to AR. However, to find success beyond the Pokémon Go phenomenon, the industry needs to forge more content partnerships."