Western Europe SVOD market to add over 20MN subs over next five years | VOD | News | Rapid TV News
By continuing to use this site you consent to the use of cookies on your device as described in our privacy policy unless you have disabled them. You can change your cookie settings at any time but parts of our site will not function correctly without them. [Close]

A survey from Digital TV Research has calculated that by 2021 there will be 55.17 million paying subscription video-on-demand (SVOD) subscribers across 17 countries in Western Europe, up from an expected 32.87 million by the end of this year. 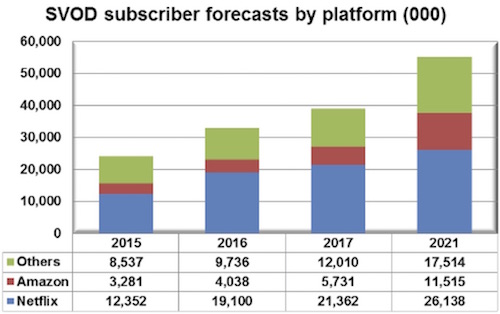 The Western Europe SVOD Forecasts report shows that about 31.5% of the region’s TV households will subscribe to an SVOD platform by 2021, up from 14.1% recorded at the end of 2015. More than eight million subscribers will be added in 2016 alone. Penetration will remain notably higher in the Nordic countries and the UK. However, four of the five largest countries —France, Germany, Italy and Spain — will be below the Western European average. Spain is set to record penetration of just 14% by 2021.

Unsurprisingly, Netflix is forecast to remain the dominant force in Western European SVOD for the next five years. However, Digital TV Research believes that Amazon Video will provide a stiff challenge and that by 2021 the two companies will control two-thirds of the region’s SVOD subs.

The UK accounted for a third of SVOD subscribers in 2015, but this proportion will likely fall to a quarter by 2021. SVOD growth is projected to be more modest in France, Italy and Spain. The Netherlands and Sweden will have more SVOD subs than Spain in 2021, despite having much smaller populations.

The report predicts that the Western European SVOD subscriber growth will see revenues total $5.87 billion by 2021, up from $2.15 billion in 2015. The UK (up by $800 million between 2015 and 2021 to $1,534 million) will remain the SVOD revenue leader, generating more than Germany and France combined in 2021. This comes despite German and French revenues more than tripling over the same period. In its calculations, the analyst noted that Amazon does not directly charge Prime subscribers to receive video content but has assumed that 60% of Prime subscribers watch video, so half the Prime subscription fee for these subs has been allocated to video.