Spacecom enters lease arrangement for AsiaSat 8 | Satellite | News | Rapid TV News
By continuing to use this site you consent to the use of cookies on your device as described in our privacy policy unless you have disabled them. You can change your cookie settings at any time but parts of our site will not function correctly without them. [Close]

Israel’s Spacecom has secured Ku-band communications capacity on the AsiaSat 8 satellite, following the loss of its AMOS-6 satellite in a launch explosion in September. 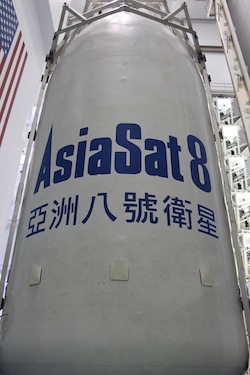 As a result of the deal, the in-orbit AsiaSat 8 will be moved and co-located with AMOS-3 to cover the Middle East, Central Eastern Europe and Africa.

The arrangement, which provides Spacecom with exclusive usage rights for all Ku-band transponders on AsiaSat 8, will start from the first quarter 2017 – subject to regulatory approvals and satisfactory testing of the satellite after relocation. It will run for a minimum of four years.

Spacecom will use the transponders for the provision of commercial satellite communications services, while AsiaSat will retain responsibility for the satellite’s tracking, telemetry and control functions.

“We are glad to strengthen our connection with AsiaSat. AsiaSat 8 satellite enables us to continue serving our customers at 4W orbital location following the end of life of AMOS-2 and provide them with additional capacity and services,” said David Pollack, CEO and president, Spacecom.

AMOS-6, which was lost during a failed Space X Falcon 9 launch on 1 September, was originally set to replace Spacecom’s aging AMOS-2 satellite. Customers lined up for transponder capacity on AMOS-6 had included Bezeq’s satellite pay-TV service service Yes and Facebook, for the improvement of Internet access in sub-Saharan Africa.

Spacecom previously contracted AsiaSat to utilise and rebrand the latter’s redundant second satellite to cover Africa. AsiaSat 2 was then moved from its position of 100.5° East at the end of 2009, and placed at 17° East to begin service as Amos 5i for Spacecom.
Tweet