South Africa begins analogue switch-off | Broadcast | News | Rapid TV News
By continuing to use this site you consent to the use of cookies on your device as described in our privacy policy unless you have disabled them. You can change your cookie settings at any time but parts of our site will not function correctly without them. [Close]

South Africa’s Northern Cape is experiencing life without analogue TV after a period of dual analogue/digital illumination in the Square Kilometre Array (SKA) came to an end on Friday (28 October). 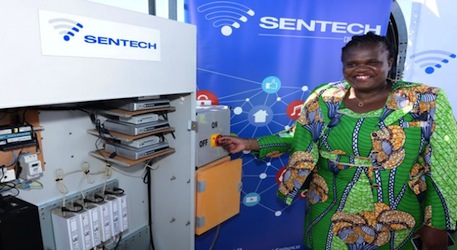 This first phase of South Africa’s transition to digital terrestrial television (DTT) will cover 98% of the SKA area, equating to 25,000 households, and comes a year-and-a-half after missing the ITU deadline for digital migration. The first towns affected by the analogue switch-off (ASO) include Van Wyksvlei, Brandvlei, Williston, Vosburg and Carnarvon.

“The analogue switch-off is a demonstration of the first major national milestone in the quest for complete analogue switch-off in the country. The ASO process is undertaken in phases across the nine provinces; the Northern Cape being the first in line,” said Ayanda Holo, director of provincial and local liaison for the Government Communication and Information System (GCIS).

Communications Minister Faith Muthambi (pictured at the ASO ceremony) said those border-lying areas that had experienced the greatest problems with interference to analogue signals would be the first to transition to digital TV.

Sentech, the state-owned broadcasting signal distributor, claims it has concluded the installation of DTT infrastructure with 178 transmitter stations nationwide and a direct-to-home (DTH) broadcasting infrastructure to ensure 100% DTT access for South African citizens.

“It is an honour for Sentech to be a part of this milestone event and we remain committed to ensuring connected citizens through a digital network,” Sentech’s CEO, Mlamli Booi said as the analogue signals were switched off in the SKA region.

The analogue switch-off (ASO) will be undertaken in phases across the nine provinces, starting with the Northern Cape and followed by the Free State, Limpopo, Mpumalanga, North West, Eastern Cape, KwaZulu-Natal, Western Cape and Gauteng.

Sentech will continue to provide help and support for the public regarding the switch to digital transmission. So far 99% of the distributed, subsidised set-top boxes (STBs) have been activated within the SKA areas, the signal distributor claims.

The move marks a positive step in a process that has been fraught since South Africa missed the ITU’s deadline of June 2015. The Department of Communications is currently involved in a legal battle with free-to-air broadcaster e.tv over the technical specifications of the STBs to be used to receive digital TV signals. E.tv applied to the court for a provision in the country’s digital migration policy for Government-subsidised STBs to encrypt broadcast signals, which the Supreme Court of Appeals ruled in support of earlier this year.

As a result, the Universal Service and Access Agency of South Africa, which has been charged with the responsibility of managing the production and installation of STBs, has been ordered to stop manufacturing the decoders until further notice.

The Department of Communications and pay-TV platform MultiChoice oppose the adoption of encryption and have launched a Constitutional Court appeal against the Supreme Court of Appeals’ (SCA) ruling on encryption for STBs.