More than half of Millennials have ‘show-dumped’ | Media Analysis | Business | News | Rapid TV News
By continuing to use this site you consent to the use of cookies on your device as described in our privacy policy unless you have disabled them. You can change your cookie settings at any time but parts of our site will not function correctly without them. [Close]

More than half of Millennials have ‘show-dumped’

Millennials and Generation Z viewers are the most likely to give up on shows they previously enjoyed when it becomes too difficult to access them, according to TiVo. 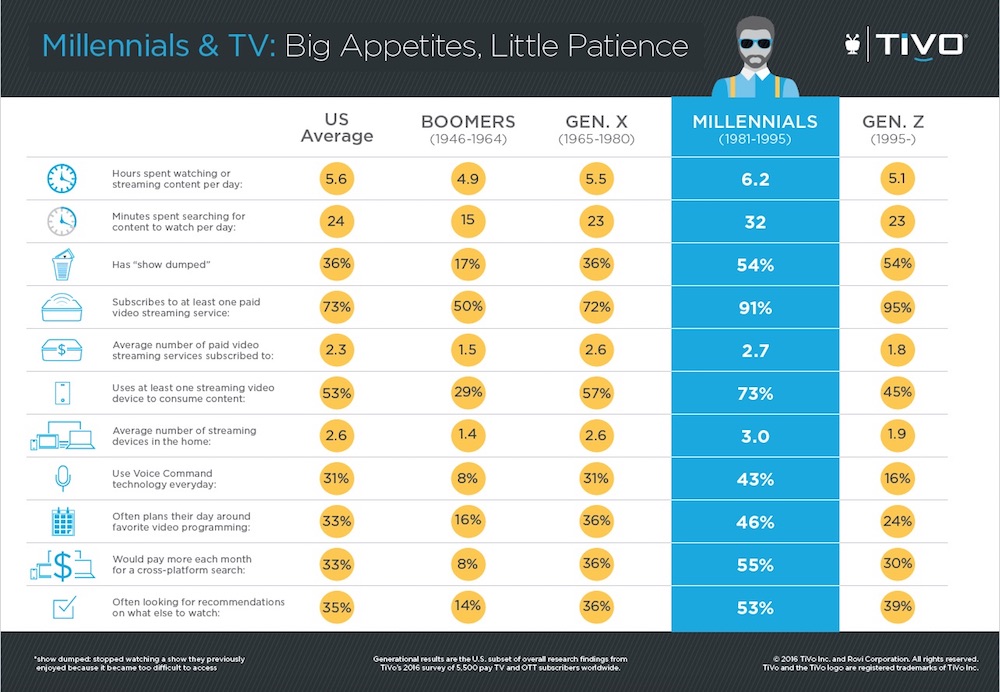 Continuing the conversation around ‘show-dumping,’ TiVo research found that, when finding the content trapped behind paywalls or spread across a variety of entertainment sources, younger viewers simply walk away. On the other hand, TiVo’s survey also revealed that the millennial generation spends the most time each day watching video content – 6 hours per day. There is simply a limit to how many hoops they are willing to jump through before quitting on a specific show.

“The media industry is facing a perfect storm with increased choice and access to content, at the cost of massive fragmentation and frustrated consumers,” said Paul Stathacopoulos, vice president of strategy and strategic research, TiVo. “The coveted millennial demographic is in the eye of this storm, consuming the most content across the most services and platforms. However, members of this generation have short attention spans, and they are the most likely to show-dump when access to content becomes challenging. These are cautionary signs for content owners who rely on loyalty and continued engagement to rationalise and realise returns on their investments in creative properties.”

A staggering 54% of millennials have show-dumped, giving up on a show they previously enjoyed because it became too difficult to access the content, in contrast to just 17% of boomers. In all, Millennials spend 32 minutes per day searching for content to watch, a number boosted by the number of services and devices they have in the home.