HbbTV gains strength in Europe as smart TV penetration rises | Broadcast | News | Rapid TV News
By continuing to use this site you consent to the use of cookies on your device as described in our privacy policy unless you have disabled them. You can change your cookie settings at any time but parts of our site will not function correctly without them. [Close] 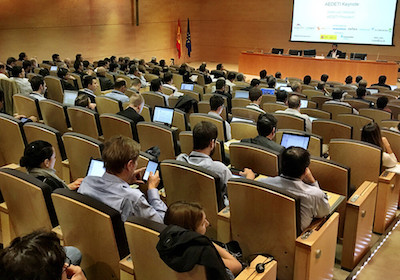 According to the figures, presented during the HbbTV Symposium: Open for business which is being held in Madrid, Germany has the most promising market for hybrid TV. Over 60% of the total TV sets are already smart and 57% support the connected TV standard, with similar figures in Switzerland (72% smart, 64% HbbTV-ready) or the Netherlands (74%, 62%).

The HbbTV scenario looks also on the up in other countries like Spain and the Nordic territories, while it remains with low implementation in the UK – where the BBC is aiming to boost HbbTV development - and Italy.

The Spanish case was heighted by Ignacio Gómez, director of innovation at Spain’s RTVE which also participated in the event. Around 4.5 million HbbTV devices have been sold in Spain, 80% of which are connected TV sets. In 2015, out of the 3.2 million TV sets sold, 1.4 million were connected with the majority supporting HbbTV. In an addition, according to RTVE’s own figures, two million HbbTV devices are regularly used to access different applications of connected television.

“Through HbbTV we are able to generate different signals and stream them on the TV in order to, for example, cover simultaneous events from different locations,” said Ignacio Gomez, who gave the example of the 19 simultaneous feeds RTVE aired to cover the Rio 2016 Olympics.

"The consumer only wants to access the content,” noted Jürgen Boyny, global director of consumer electronics at GfK. The GfK figures show that most viewers use HbbTV to access the video-on-demand (VOD) content of their favourite broadcasters through catch-up (58% of HbbTV users do it), watch videos on YouTube (57%) and display other VOD platforms (48%).

The annual event of the HbbTV Association is being held in Madrid between 18-19 October and is co-organised by Spain’s Asociación Española de Empresas de Televisión Interactiva (AEDETI).