SVOD booms across the globe | VOD | News | Rapid TV News
By continuing to use this site you consent to the use of cookies on your device as described in our privacy policy unless you have disabled them. You can change your cookie settings at any time but parts of our site will not function correctly without them. [Close]

SVOD booms across the globe

Whether cutters, shavers or cord-nevers, the number of global households with subscription streaming video on demand (SVOD) services is hurtling along says research from Ampere Analysis. 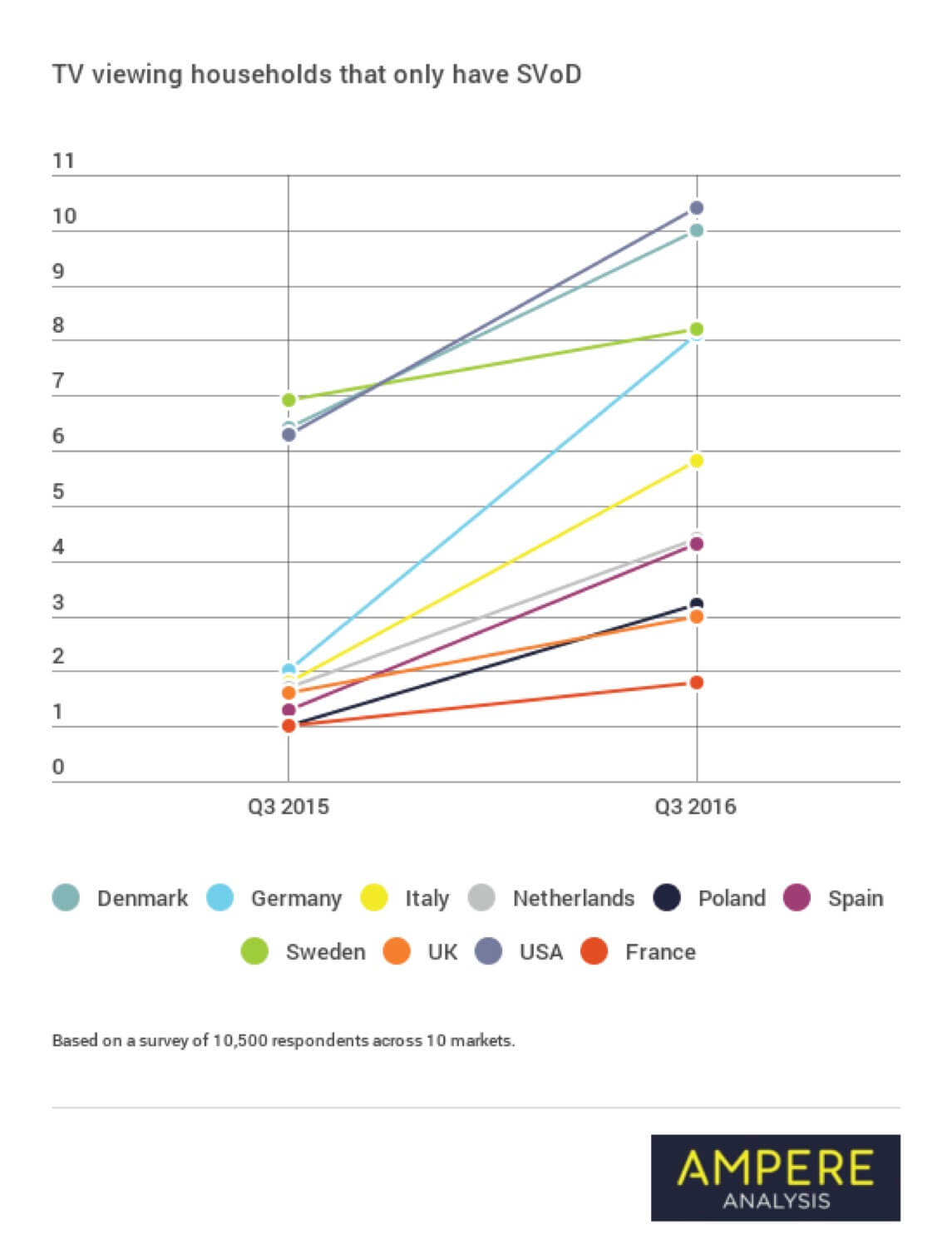 Based on its analysis of 10 key markets, Ampere described the typical SVOD subscriber as being aged 35 or under, more likely to live with a partner and young kids. They are also slightly more likely to be male at 53%.

The analyst believes that driven by so-called DIY next-generation TV bundles, the proportion of households that only have an SVOD subscription is increasing, as are the number of SVOD services taken in each SVOD home. The largest SVOD markets are the US, with 71% of homes having at least one service, then Sweden (53%), the UK (42%), and the Netherlands (38%). The fastest-growing SVOD markets over the past 12 months were found to be Italy and Spain (both up 17 percentage points), the Netherlands, Sweden and the US (all up 14 pp) and the UK (up 9 pp). The slowest growth was found to be in Poland (up 4.5 pp) and France (up 7.7 pp).

Looking in terms of homes that only have an SVOD service, the US once again led the way with just over a tenth of homes, closely followed by Denmark. The smallest markets were France and the UK with 1.8% and 3% respectively. The fastest growing SVOD-only homes territories were Germany, up 6.1 percentage points year-on-year, Denmark (up 3.6 pp) and the US (up 4.1 pp). The slowest growth in SVOD only is in the UK (up 1.4 pp) and France (up 0.8 pp).

Drilling deeper as to how many SVOD products homes had, Ampere found that US homes have nearly 2.5 services per house, representing what the analyst described as a ‘significant’ DIY streaming TV bundle. The US rate was just over double that in Europe as a whole but the survey showed that in Spain, Sweden, Denmark and Italy the rate had already exceeded 1.5 and the UK was not far behind.

Commenting on the study, Ampere Analysis research director Guy Bisson said: “SVOD-only homes are a growing and significant market segment across all markets, but perhaps more interesting is the growth in the bundling of multiple SVOD services by consumers. These DIY next-generation TV bundles look set to be a key driver for subscription TV in the coming years and an area that operators must embrace in order to remain competitive.”