Big four control majority of West European pay-TV market | Media Analysis | Business | News | Rapid TV News
By continuing to use this site you consent to the use of cookies on your device as described in our privacy policy unless you have disabled them. You can change your cookie settings at any time but parts of our site will not function correctly without them. [Close]

Buoyant it may be, but the Western European pay-TV market is in the grip of only a small number of players with just Liberty Global, Sky Europe, Vodafone and Altice controlling the lion’s share of subs, says Digital TV Research. 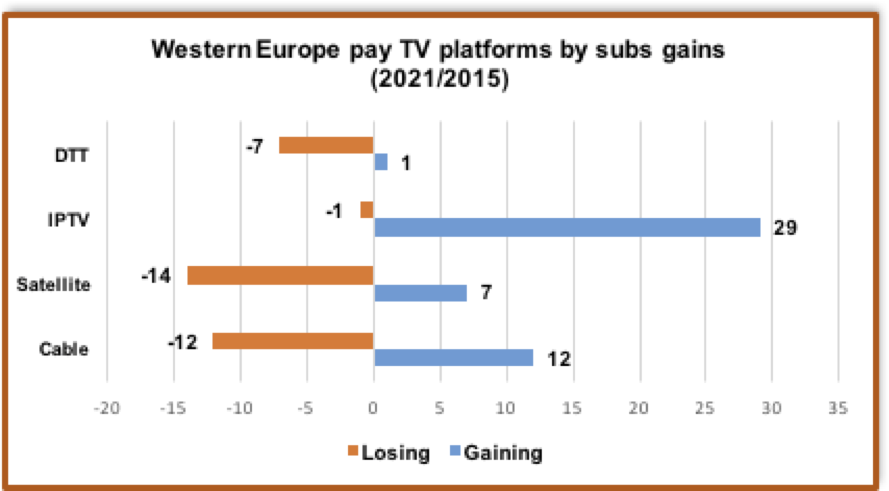 The analyst’s Western Europe Pay TV Operator Forecasts report calculates that the region’s 73 top operators collectively accounted for 93% of Western Europe’s pay-TV subscribers by the end of 2015, a total of 97.26 million. The report projects that this proportion will fall by one percentage point by 2021 as the market expands to 105 million pay-TV subscribers. Liberty Global is likely to have 17.4 million subs with Sky’s satellite business hot on its heels with 17.3 million. Vodafone will be a long way back with nine million, then Altice on 5.5 million and Telefónica on 4.8 million.

Digging deeper though, the analyst notes that by 2021, Liberty Global will have likely lost 1.15 million subs between 2015 and 2021, mostly from shedding old analogue customers, whereas Telefónica will gain 1.23 million and Altice nearly one million.

Looking at platforms, the report predicts that 29 of the 30 available IPTV platforms will gain subscribers between 2015 and 2021, yet by contrast, 14 of the 21 satellite platforms and seven of the eight DTT operators will lose subscribers during the same period. Digital TV Research regards this trend as perhaps surprising considering the fall-off from the analogue transition is that half of the cable platforms will gain subs.

Examining what this will mean for business, the report states that the 73 top operators generated 93% of Western Europe’s $30.61 billion pay-TV subscription and PPV revenues in 2015. This proportion will hold steady until 2021, although overall revenues will not grow. Liberty Global and Sky Europe will together continue to take just under half of the region’s revenues.