Millennial cord-nevers embrace SVOD | OTT | News | Rapid TV News
By continuing to use this site you consent to the use of cookies on your device as described in our privacy policy unless you have disabled them. You can change your cookie settings at any time but parts of our site will not function correctly without them. [Close]

According to research from The Diffusion Group, the majority of millennial cord-nevers turn to subscription video-on-demand (SVOD) for entertainment. 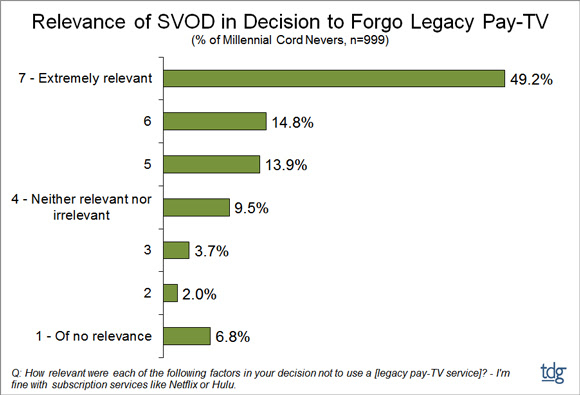 The firm found that adult broadband users between the ages of 20 and 35 feel little need for a traditional cable, satellite or telco-TV service. About three-quarters of them believe that SVOD services play a key role in their decision to forgo legacy pay-TV (answering five or greater on a seven-point scale). And two-thirds of them rank this factor as very relevant (six or greater) in this decision, with half ranking it as extremely relevant (seven).

“The choice to live without legacy pay-TV is undoubtedly multi-dimensional," said Michael Greeson, director of research at TDG. "High costs, poor value and the availability of substitutes all play a role in this decision. Yet while cost of service has long been the dominant factor driving millennial cord-nevers, the availability and sufficiency of SVOD now ranks as equally important.”

Greeson noted that, of the 81% of millennial cord-nevers that use SVOD, more than nine in ten believe the services are sufficient to meet their video needs.
Tweet