Massive growth forecast for mobile/social video | Mobile | News | Rapid TV News
By continuing to use this site you consent to the use of cookies on your device as described in our privacy policy unless you have disabled them. You can change your cookie settings at any time but parts of our site will not function correctly without them. [Close] 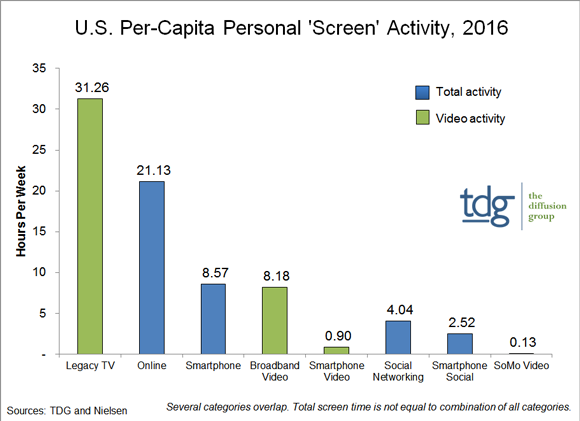 According to research from The Diffusion Group (TDG), the role that smartphones play in total screen time continues to expand. Per-capita use now stands at 8.6 hours a week, greater than the total amount of time consumers spend watching broadband video (8.2 hours per week). Notably, social networking now comprises four hours of weekly screen time, of which 63% is spent using services like Instagram (2.5 hours per week).

The overlap between smartphone and social network use is quite significant, which has led a number of companies to test the viability of social-mobile (SoMo) networks for video delivery. While SoMo video currently accounts for 0.13 hours per week of screen time (10% of smartphone use and 14% of total smartphone video time), this is expected to change dramatically during the next decade.