Half of large TVs sold are 4K-ready | Media Analysis | Business | News | Rapid TV News
By continuing to use this site you consent to the use of cookies on your device as described in our privacy policy unless you have disabled them. You can change your cookie settings at any time but parts of our site will not function correctly without them. [Close]

Half of large TVs sold are 4K-ready

JD Power has issued its 2016 TV Satisfaction Report, with Sony edging out Samsung in the smaller-screen segment. 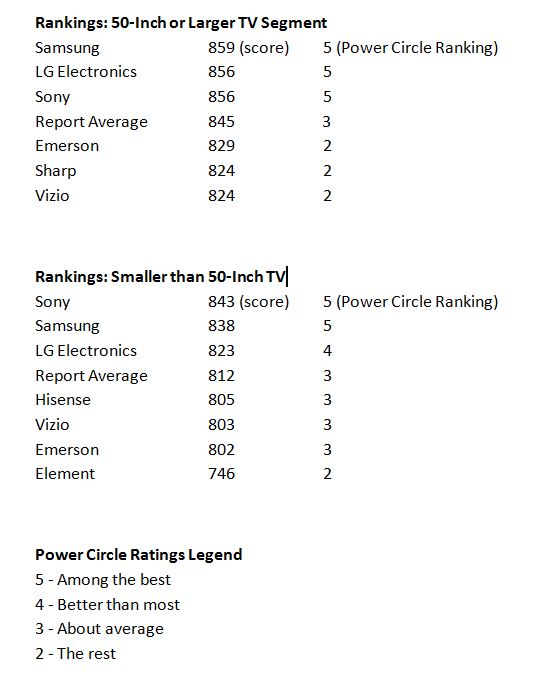 Overall, the larger displays are winning: consumers with TVs 50 inches or larger were more satisfied than those with smaller TVs (845 points v 812).

Interestingly, smart TVs make up 80% of TVs 50 inches or larger, and 59% of the smaller TVs. About a quarter (27%) of those who purchased a TV 50 inches or larger chose one with a curved screen (just 17% of smaller-screen buyers did), while 52% of larger TVs purchased were 4K UltraHD compatible (just 25% for smaller models).

To that latter data point, it’s interesting to consider this in the context of the Consumer Technology Association’s (CTA) semi-annual forecast.

It postulates that for the 4K/Ultra HD TV ecosystem, 2016 will be a flagship year, driven in part by the market introduction of next-generation technologies like HDR. CTA expects shipments of 4K/Ultra HD displays will reach 15 million units (a 105% increase), and revenue will exceed $12.9 billion (a 69% increase). CTA adds that new to the market in 2016, 4K/Ultra HD Blu-ray players will further build the ecosystem with 700,000 units sold and $63 million in revenue.

Price of course was top decision factor in buying a TV for JD Power respondents; 67% of those with a TV smaller than 50 inches cited price as the primary reason for the selection, while it was important for 55% of those who purchased a larger TV.

In terms of what causes dissatisfaction, the biggest TV problems cited by consumers include glare and/or reflection (25%); difficulty connecting to Wi-Fi (18%); remote controls that don’t work properly (13%); and sound that’s distorted, low or missing (13%).

The annual report measures satisfaction with TVs among customers who bought one in the past 12 months.