Quarter of US households have cut the cord | OTT | News | Rapid TV News
By continuing to use this site you consent to the use of cookies on your device as described in our privacy policy unless you have disabled them. You can change your cookie settings at any time but parts of our site will not function correctly without them. [Close]

Quarter of US households have cut the cord

A quarter (25%) of all US TV households are now going without cable and satellite reception, according to GfK’s 2016 Ownership and Trend Report from The Home Technology Monitor. 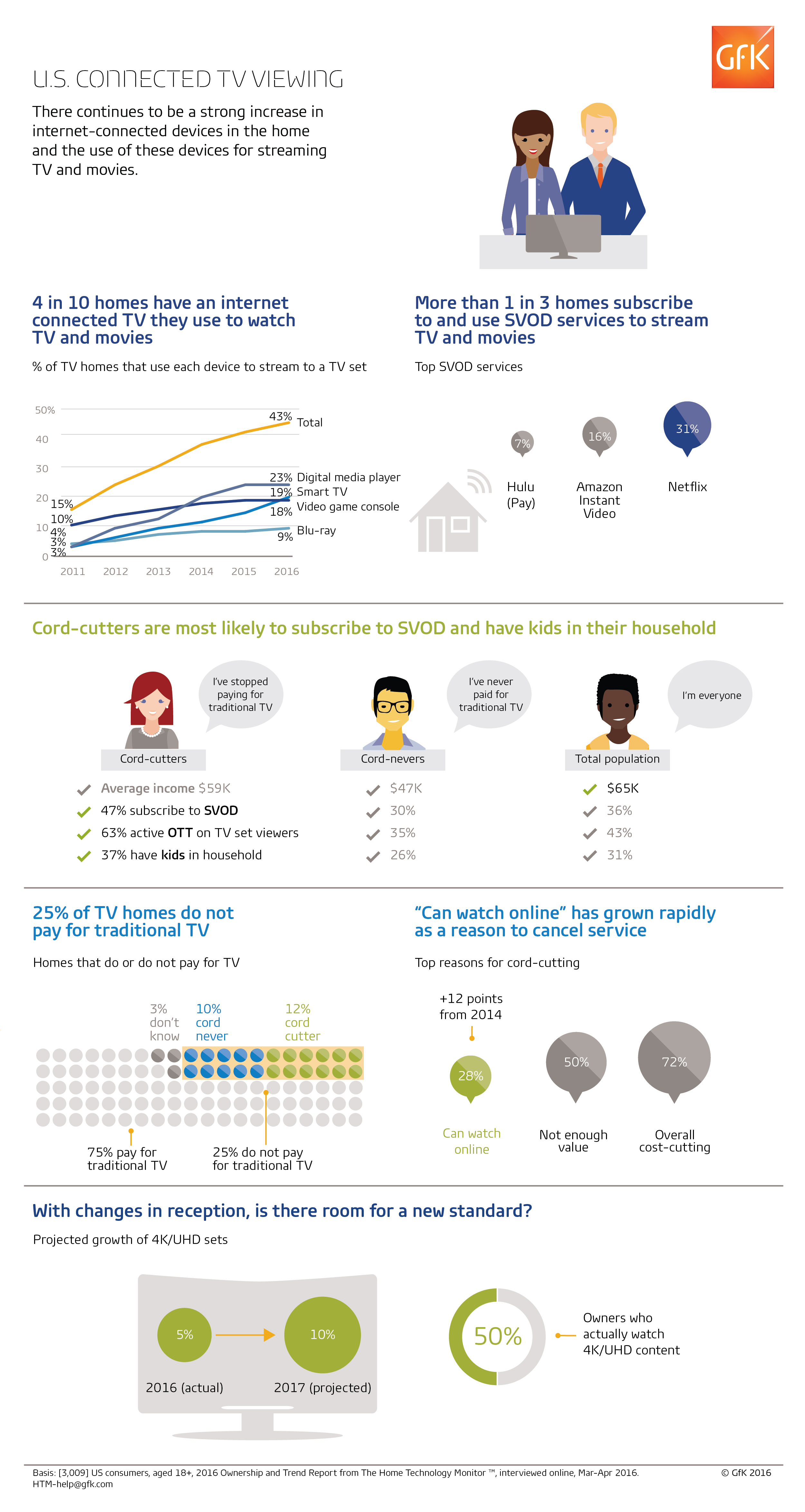 The survey shows that levels of broadcast-only reception and Internet-only video subscriptions in the US have both risen over the past year. And in fact, 17% of US TV households now rely on broadcast-only (aka over-the-air or OTA) reception, up from 15% in 2015. Another 6% say they only use Internet services such as Netflix, Amazon Prime, Hulu or YouTube and do not have traditional broadcast or pay-TV reception at all; this compares with 4% a year ago.

TV households with a resident between 18 and 34 years old are much more likely to be opting for alternatives to cable and satellite; 22% of these homes are using broadcast-only reception (versus 17% of all US households), and 13% are only watching an Internet service on their TV sets (versus 6% of all TV homes). Overall, 38% of 18-34 households rely on some kind of alternative TV reception or video source, versus 25% of all homes.

On the other hand, households with at least one resident age 50 or above have higher rates of subscribing to cable or satellite services. More than eight in ten (82%) have some sort of pay-TV subscription, versus 75% of all US TV households. The difference comes almost exclusively in levels of cable subscription, with 46% of 50-plus homes paying for cable reception, compared with a US average of 41%.

“The fact that a statistically significant increase in broadcast-only reception occurred over just one year may be further proof that the cord-cutting/cord-never phenomenon is accelerating,” said GfK Media & Entertainment practice SVP David Tice. “If you include homes that have no TVs at all – about 3% of all households – then less than three-quarters (73%) of US homes continue to have pay TV service, with the attendant implications for all stakeholders – not just the pay TV services themselves, but also networks, content providers, and advertisers.”

Broadcast-only reception is more common in TV households earning under $30,000 per year (26%, versus 17% among all TV homes) and those with Hispanic residents (24%). Households with incomes of $50,000 a year or more post higher levels of satellite subscription – 27%, compared to an average of 21%.

Interestingly, recent research from Mohu revealed significant consumer discontent with the state of access to TV. Asked about their attitudes toward cable, satellite and over-the-top (OTT) streaming TV services, half have an unfavourable opinion of cable TV companies, and 38% view satellite TV companies unfavourably.
Tweet