US streaming viewers’ quality expectations rise sharply | Online Video | News | Rapid TV News
By continuing to use this site you consent to the use of cookies on your device as described in our privacy policy unless you have disabled them. You can change your cookie settings at any time but parts of our site will not function correctly without them. [Close]

Almost 90% of US online video viewers regard it as very or extremely important to receive a TV-like experience every time and on every screen, says a Verizon Digital Media Services survey. 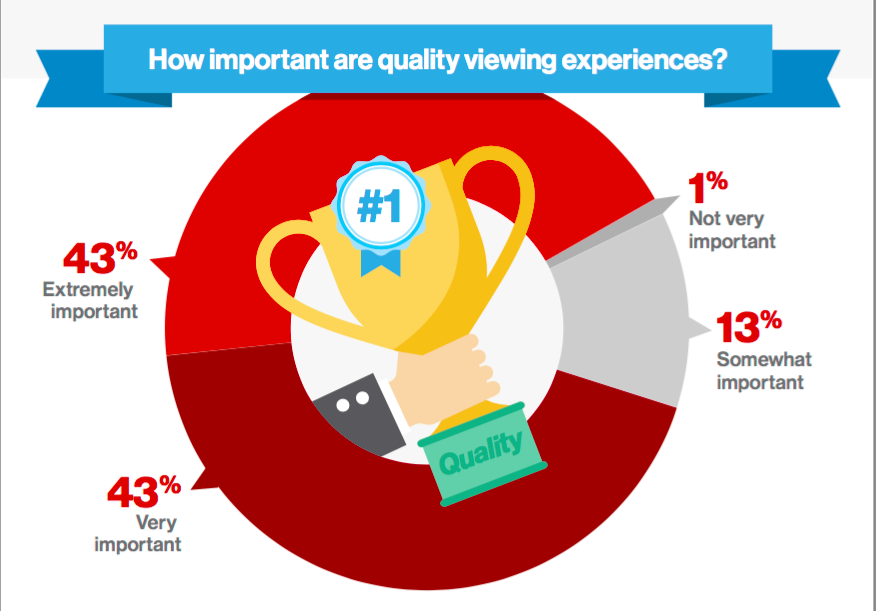 The report makes the stark conclusion that poor video quality is one of the few, but key, factors that could delay the over-the-top (OTT) juggernaut.

The study of 1,000 US adults watching over 14 hours of streamed video further found that two-fifths of connected TV users say they stream video on their devices daily, and 54% are watching five days or more a week. A third of mobile viewing sessions lasted 15 minutes or less, but nearly half were 31 minutes or longer. Based on Verizon Digital Media Services’ platform analytics, Android mobile viewers watched for 63 minutes per session, while iOS viewers watched slightly less at just a little under 62 minutes. On mobile, the average viewing session was 59 minutes.

However, the study also found that mobile viewers gave up watching after 13 minutes of poor quality, and that can result in a 78% drop in viewing time. Average viewing session length on a PC was 81 minutes, but viewers reported abandoning their device after 16 minutes, an 80% decrease. Just 18% of PC viewing sessions were 15 minutes or less, and 68% were 31 minutes or longer.

In what should be a wake-up call for the industry, the study revealed that the average viewing session across all devices fell, on average, by 77% when video quality was significantly reduced. Nearly a third of viewers abandon viewing at least every other time they watch on a mobile device. A quarter of viewers said that poor video quality causes them to stop watching content on their PCs half of the time or more while 13% of mobile users and 11% of PC and connected TV viewers say they stop viewing at least one video virtually every time they had
a poor viewing session.

In a call to action, and showing how it was in operators’ best interests to do so, Verizon said: It’s clear that poor video quality results in high rates of viewer abandonment. With more viewers watching video online than ever before, it is critical that VSPs focus on improving their overall video quality so that they don’t lose viewers to higher- performing OTT services. Eliminating all of the viewing problems will have a dramatic effect on VSP revenue. Ad-supported services would see an increase in ad revenue of at least 25%. Subscription VOD providers would see a drop in churn of 10% or more.”
Tweet