SVOD in half of US households, gains parity with DVR | Media Analysis | Business | News | Rapid TV News
By continuing to use this site you consent to the use of cookies on your device as described in our privacy policy unless you have disabled them. You can change your cookie settings at any time but parts of our site will not function correctly without them. [Close]

SVOD in half of US households, gains parity with DVR

The DVR has been an undoubted success for the US CE market for the last 15 years, and research from Nielsen has shown that subscription video-on-demand (SVOD) can now be regarded in the same category. 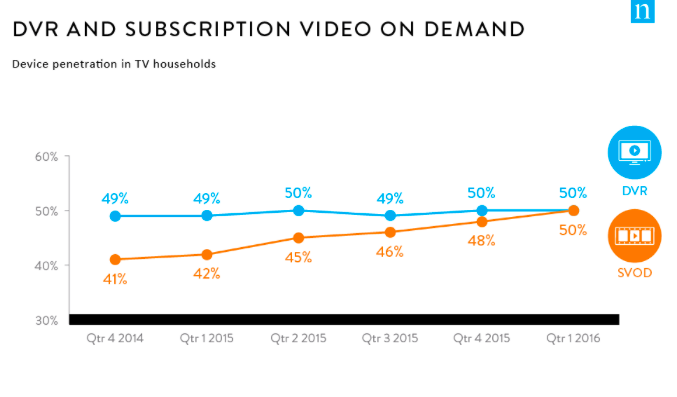 According to Nielsen’s first-quarter 2016 Total Audience Report, SVOD services such as Netflix or Hulu have reached a milestone, with penetration catching up to DVR penetration to half of all homes in the US. Nielsen says that SVOD penetration has been rising steadily over the past year, illustrating that viewers have a continued desire to control what they watch and when they watch it. It adds that near to 30% of homes have a both DVR and access to SVOD, up nearly 20% year-on-year.

Nielsen said that even though time spent using traditional devices like television has remained constant, consumer attention continues to expand. That’s not to say consumers are ignoring traditional forms of media – in fact, traditional platforms continue to account for the largest part of media usage.

People were also found to be spending more time with newer technologies. Daily usage of tablets and smartphones alone has increased 63% and 60%, respectively, among adults since just last year: tablet usage is up 12 minutes, and smartphone usage increased 37 minutes. In video the heaviest users of such digital devices account for a vast majority of each device or platform’s overall usage. It showed that 83% of smartphone video viewing, 87% of in-home PC streaming and 71% of TV-connected device usage stems from the top fifth of users. This, says Nielsen, shows that smaller behaviours by fewer people tend to be more concentrated among the heaviest users.

Concluding, Nielsen said that the report shows that the rapid growth of new media is indicative of an evolving media palate. It noted that with more choices being made available to consumers, it’s becoming increasingly pertinent for marketers and advertisers to understand the behaviours associated with them.