Global ad expenditures to reach $537BN in 2016 | Ad Tech | News | Rapid TV News
By continuing to use this site you consent to the use of cookies on your device as described in our privacy policy unless you have disabled them. You can change your cookie settings at any time but parts of our site will not function correctly without them. [Close]

Global advertising expenditure across all platforms will grow 4.1% in 2016, reaching $537 billion, according to a survey by ZenithOptimedia. 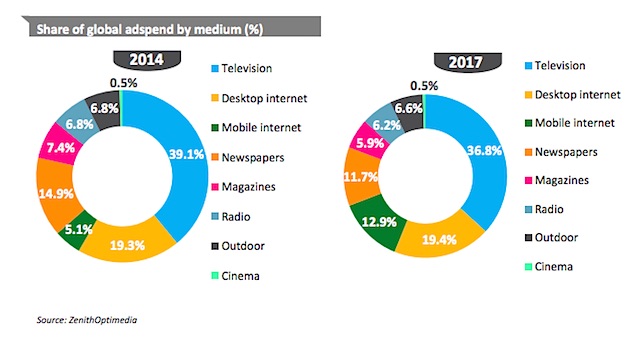 The survey noted that the forecast is 0.5 percentage points less than what it forecast in March. The reduction is mainly the result of currency devaluation in Argentina, in the absence of which it would be forecasting 4.5% ad spend growth this year.

“Since 2012 we have looked at the growth rates of different regional blocs defined by the similarity of the performance of their ad markets as well as their geographical proximity,” Zenith said in its report. “This captures the behaviour of different regional ad markets more effectively than looking at regions defined purely by geography, such as Western Europe, Central and Eastern Europe and Asia Pacific.”

Western and Central Europe was one of the regions most affected by the financial crisis of 2008-2009, which then turned into the Eurozone crisis.

“The Eurozone crisis is not definitively over – Greece’s debts are still unsustainably high – but the region’s ad market has been enjoying solid recovery since 2014,” Zenith noted. “Advertising expenditure grew 3.7% in 2014 and 4.0% in 2015, and is forecast to average 3.2% growth a year to 2018.”

Meanwhile, France continues to lagging behind with weak business confidence and household consumption, and industrial unrest. The firm forecast French ad spend to grow only 0%-1% a year to 2018.

And the UK, the stand-out growth market for the last four years, is finally starting to slow. The company forecasts 5.6% growth in UK ad spend this year, down from 9.2% in 2015, and 4%-5% growth over the next two years. Its growth will remain well ahead of the Western and Central Europe average.

North America was the first region to suffer the effects of the financial crisis, but it was also quick to recover, and ad spend in North America was more robust than in Western and Central Europe between 2012 and 2014. This changed in 2015 as the European markets most affected by the Eurozone crisis recovered rapidly, while declining network television ratings eroded US ad spend growth. North America is now growing at about the same rate as Western and Central Europe: for the former Zenith forecast 3.3% annual growth in ad spend to 2018, compared to 3.2% for the latter.

Argentina, Brazil, Ecuador and Venezuela meanwhile (which account for 56% of Latin American advertising expenditure) are currently suffering recession, compounded by rapid devaluation in Argentina and an economic crisis in Venezuela. In December last year the Argentinean Government lifted its exchange rate controls, leading to an immediate 30% devaluation of the currency, followed by further declines this year. Meanwhile Venezuela is running out of basic supplies and is heading for hyperinflation.

The survey showed that video ad views and video views both grew 24% respectively, marking 21 consecutive quarters of growth. In addition, it revealed that the cross-platform opportunity continues to grow in scope, as 63% of monetisation now occurs outside desktop environments, on tablets, smartphones and on platforms such as over-the-top (OTT) and video-on-demand (VOD) set-top boxes (STBs).