IHS: new Bundesliga TV deal a game changer for Germany | Media Analysis | Business | News | Rapid TV News
By continuing to use this site you consent to the use of cookies on your device as described in our privacy policy unless you have disabled them. You can change your cookie settings at any time but parts of our site will not function correctly without them. [Close]

The new deal to televise the Bundesliga German national football league whereby no single operator will hold exclusive rights will bring the country into line with other major markets says research from IHS. 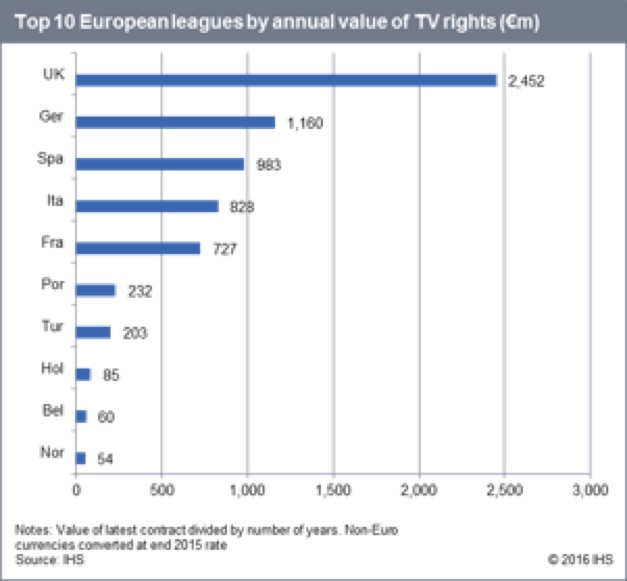 Following a successful outcome to the Deutsche Fußball Liga (DFL) tender process, Sky will show 572 live matches a season from 2017/18 to 2020/21 across all platforms, meaning that it will continue to broadcast 93% of all live matches, including full live coverage of Bundesliga matches on Saturday and Sunday afternoons. For the first time, Sky will also become the exclusive live broadcaster for all matches of the Bundesliga 2 regular season, with an additional live match on Monday evenings.

Eurosport’s entry in the auction meant the DFL did not invoke its ‘no single buyer’ rule which, said the analyst, would have made one of the live rights packages available for over-the-top (OTT) exploitation. The new deal will bring Germany into line with most other countries in that no single operator will hold exclusive rights to national league football.

Yet for its rights package, Sky Deutschland will pay €3.5 billion over four years, 80% more than the €1.9 billion it is paying in the current 2013-2017 contract cycle. IHS calculates that on an annual basis, the value of Bundesliga rights increased by 87%, less than the 180% for the latest deal for the Super Lig in Turkey and 108% for the rights to the Liga Sagres in Portugal. Sky’s bid to retain its leadership of Bundesliga rights is similar to the 85% increase in its payment for the new Premier League contract in the UK and Ireland.

According to IHS Technology senior principal analyst, TV Programming, Tim Westcott, this 80% increase in Sky’s payment for rights underlines the importance of live league football to pay-TV market leadership, and there are obvious parallels with the latest Premier League deal in the UK.

“The increase in value of the Bundesliga’s TV rights shows how far the league has come in developing its revenue base,” he remarked. “The Bundesliga will leapfrog Spain’s La Liga and Italy’s Serie A to become the second most valuable European league. Even so, the Bundesliga, worth €1.16 billion a year, is still far short of the Premier League, €2.5 billion… Eurosport’s entry in the market for domestic Bundesliga rights is another sign that its parent Discovery is serious about investing in strengthening its rights portfolio.”