Video to drive global IP traffic to triple by 2020 | Infrastructure | News | Rapid TV News
By continuing to use this site you consent to the use of cookies on your device as described in our privacy policy unless you have disabled them. You can change your cookie settings at any time but parts of our site will not function correctly without them. [Close]

Video to drive global IP traffic to triple by 2020

Global Internet traffic will nearly triple at a compound annual growth rate (CAGR) of 22% over the next five years, with video very much driving this surge in consumption, says the latest Cisco Visual Networking Index (VNI). 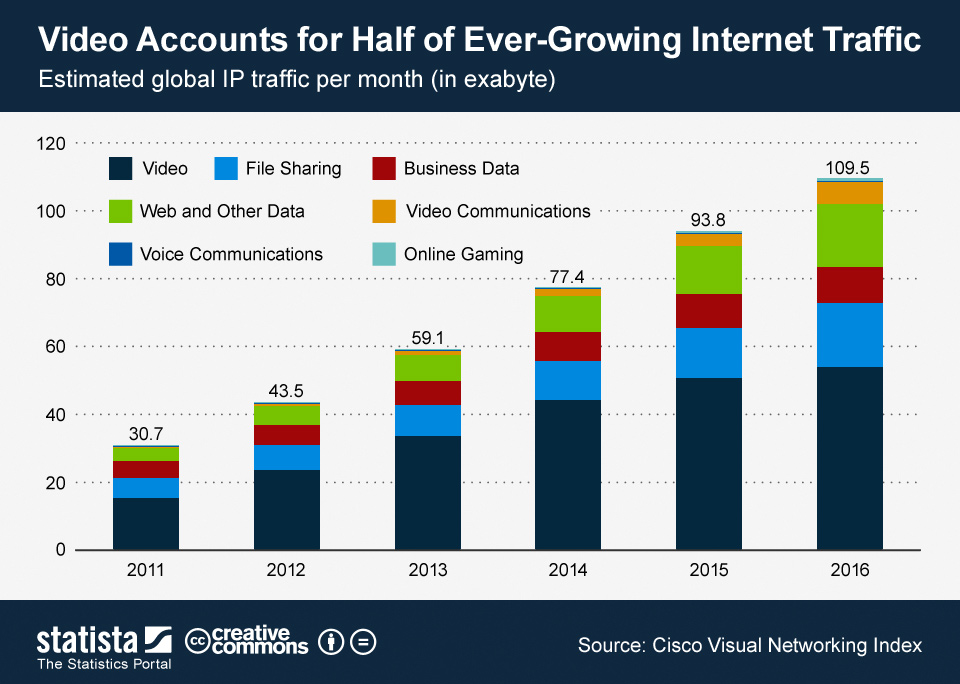 More than one billion new Internet users are expected to join the global Internet community, growing from three billion in 2015 to 4.1 billion by 2020. But the global digitisation transformation, based on the adoption of personal devices and deployment of machine-to-machine (M2M) connections, will have an even greater impact on traffic growth.

“The digital transformation is happening now for billions of consumers and businesses users across the globe,” said Doug Webster, vice president of service provider marketing, Cisco. “Innovation is imperative for Cisco and its service provider customers to deliver scalable, secure, high-quality services and experiences over all types of broadband network infrastructures.”

In terms of sheer volume, global IP traffic is expected to reach 194.4 exabytes per month by 2020, up from 72.5 exabytes per month in 2015. The global annual run rate will reach 2.3 zettabytes by 2020. For perspective, 2.3 zettabytes is equivalent to 12 hours of streaming music per day of the year per capita or 33 hours of Ultra HD video streaming for each person on earth.

Across all time zones, ‘Internet prime time’ generally occurs between 9pm and midnight.