Asian OTT sector to be worth $18.4BN by 2021 | OTT | News | Rapid TV News
By continuing to use this site you consent to the use of cookies on your device as described in our privacy policy unless you have disabled them. You can change your cookie settings at any time but parts of our site will not function correctly without them. [Close]

China will overtake Japan in 2016 to become the greatest of Asia Pacific’s over-the-top (OTT) video revenue generators thanks to the region’s growing smartphone base, according to Digital TV Research. 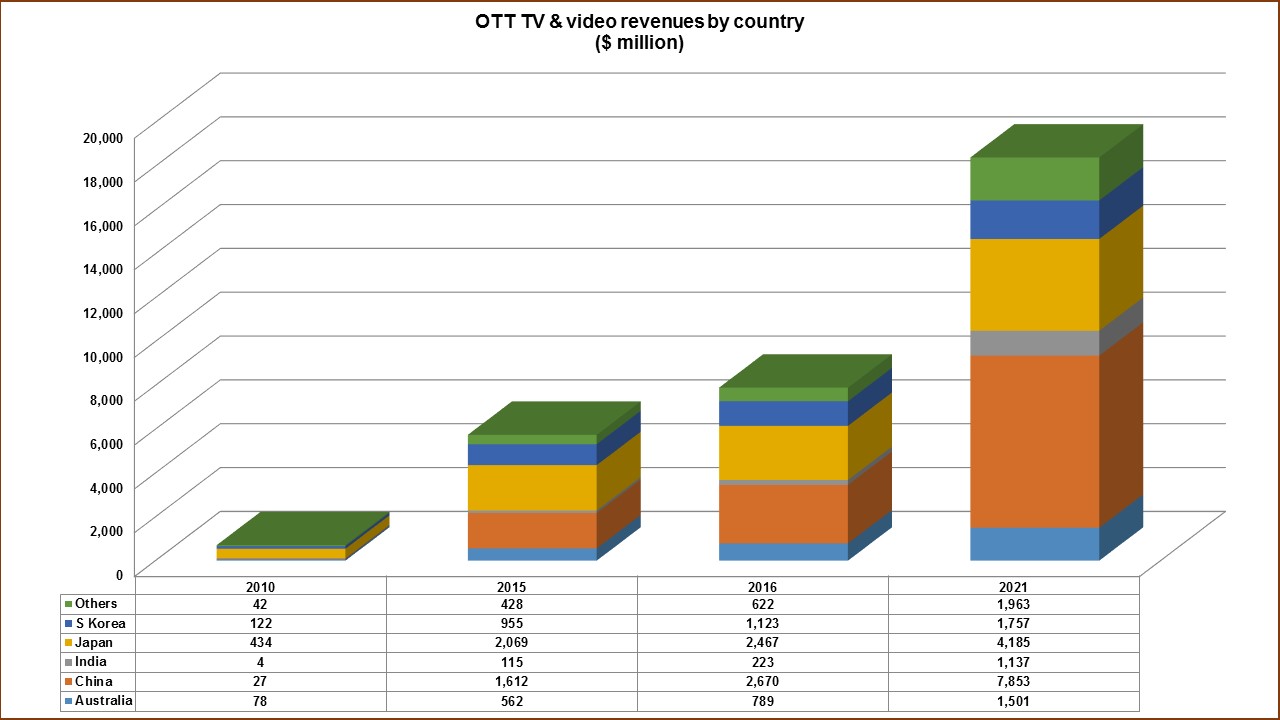 The main source of the revenue on Asia Pacific OTT sites remains advertising, which will rise $6 billion from the $2,609 million generated in 2015. China will be responsible for $4,911 million of the region’s total $8,745 million OTT advertising revenue in 2021, with Japan contributing a further $1,475 million of the total.

By 2021 download-to-own and electronic sell-through film and TV show revenues are forecast to reach $1,904 million, up from $691 million in 2015, with Japan accounting for $692 million of this figure. OTT TV and video rental will rise to $1,307 million, according to Digital TV Research.

“Much of the OTT activity in 2015 and 2016 has involved local players establishing themselves in their domestic markets. However, a handful of companies are taking an international approach,” said Simon Murray, principal analyst, Digital TV Research.

“Although there is substantial demand for foreign fare, local content is necessary in each market to entice subscribers. Furthermore, international players benefit from partnerships with local players to gain from their distribution and retail infrastructure. International players must also adapt their prices to local conditions. With low levels of credit card ownership in most Asia Pacific countries, local payment systems smooth the process.”

US streaming service Netflix has stirred strong interest from subscribers in Australia and New Zealand since it launched down under in March 2015. However researchers say its launches across Asia in January 2016 lacked local content, local price differentiation and suitable payment options. Local partnerships are scant, although Hong Kong’s Now TV became a partner in March 2016, and more recently Singapore’s Starhub and Singtel have agreed carriage deals with Netflix.

“Netflix’s big splash in January 2016 prompted others to up their game. Netflix may have to adjust its policy rapidly to secure market share before its rivals become too entrenched. Major markets such as China, India, Japan and Korea are already dominated by domestic players. South East Asia provides greater opportunities for international platforms,” added Murray.
Tweet