Record year for Spanish pay-TV | Pay-TV | News | Rapid TV News
By continuing to use this site you consent to the use of cookies on your device as described in our privacy policy unless you have disabled them. You can change your cookie settings at any time but parts of our site will not function correctly without them. [Close]

Known as being one of the less dynamic pay-TV markets in Europe, the scenario in Spain has changed radically with 2015 closing with nearly 1.2 million net subscriber additions. 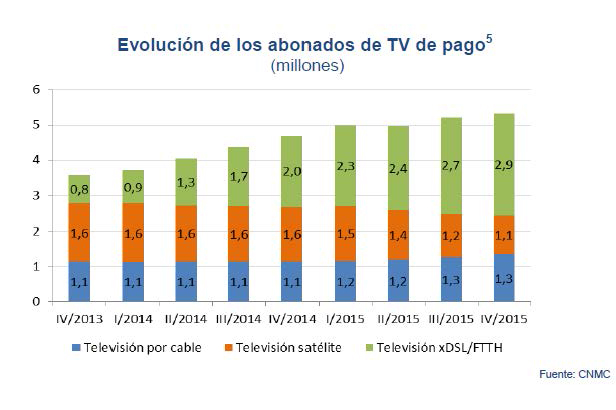 Indeed, video services, including those from pay-TV, have driven income for the telco industry. By December 2015, telecoms had generated over €30 billion in Spain, 0.5% more than in 2014, putting an end to several years of decreasing business. Audiovisual services invoiced €3.89 billion, up more than 13% since the end of 2014.

According to the annual report of the Comisión Nacional de los Mercados y la Competencia (CNMC), there two main reasons for such growth in video-related business: advertising recovery and pay-TV increasing popularity.

The first affects mainly free-to-air (FTA) TV, which has benefited from a growing advertising business. In fact, Spain’s two largest media groups, Mediaset and Atresmedia, invoiced €1.8 billion in 2015 for advertising, almost the half of the total invoiced by the media industry.

But the most surprising factor has been the strong growth in pay-TV. Business hasn’t stopped increasing since the last quarter of 2013, and over 5.5 million Spaniards are now subscribing to a TV platform, almost 1.2 million more than at the end of 2014.

IPTV, the most popular option due to telcos’ convergent offers, added nearly 900,000 subscribers during 2015. Cable TV also added subs, over 200,000, while satellite TV has stagnated.

In this market of 5.5 million subscribers, there is a clear leader: Telefónica’s Movistar+, which has just reported 3.7 million subscriptions, representing around 70% of the market.