SVOD leads home viewing changes | Media Analysis | Business | News | Rapid TV News
By continuing to use this site you consent to the use of cookies on your device as described in our privacy policy unless you have disabled them. You can change your cookie settings at any time but parts of our site will not function correctly without them. [Close]

Netflix is found in 45% of Local People Meter (LPM) TV homes, according to Nielsen, with nearly a quarter of US households now having access to smart TVs. 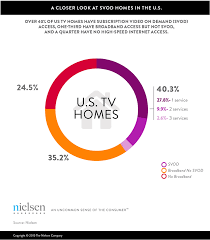 This penetration level is notable considering the analysis from BTIG analyst Richard Greenfield this week, who said in a research note that in the past two quarters, net video subscriber additions for the top seven US pay-TV companies combined (Time Warner, Comcast, Charter, DirecTV, Dish, AT&T and Verizon) were down nearly 300,000 compared with the a year ago. In fact, just in the first quarter, net video adds for the companies decreased 200,000 year over year, “a notable acceleration from the absolute decline of 54,000 [year over year] in Q1 2015.”

“Trends have actually been deteriorating for the past five quarters, with trailing 12-month subscriber additions down 588,000 compared with 92,000 in the prior 12-month trailing period,” he wrote. “We believe if the video subscriber trends of the past six months continue throughout 2016, video subscribers could fall by over 600,000 in 2016 compared to the 48,000 subscribers lost by the top seven MPVDs in 2015 and the 393,000 video sub net adds in 2014.”

Greenfield estimates the MVPD industry is on pace to lose at least 2 million full-paying video subscribers each year to a combo of cord-cutting and cord-shaving, with consumers turning to OTT and SVOD instead.

It’s a trend that Nielsen has noted as well.

“There’s no denying that technology continues to transform the video experience with each passing day,” Nielsen said. “With more and more devices in use within our homes, household viewing habits are evolving and expanding, offering more media touchpoints than ever before.”

Interestingly, the research also showed that while larger cities are usually early adopters of new technologies, small and medium cities also show some distinctive media habits. For instance, Salt Lake City, San Diego and Austin have a higher subscription video on-demand (SVOD) penetration than the national average (50%). And, tablet penetration for Norfolk, Va., San Diego and Hartford, Conn. is 60% or higher, compared with a national average of 58%.

The findings dovetail with recent research from Futuresource Consulting which suggests that both Netflix and Amazon Prime Video are increasingly prominent in the US, UK and Germany. Also, multiple service uptake is high, with 82% and 69% of Amazon Prime Video users in the US and UK respectively also taking Netflix.

The report also gave fodder to the notion that SVOD is complementary to pay-TV in many markets, even as US numbers fall: In France and Germany, pay-TV penetration is over twice as high among Netflix households than in non-Netflix households.