Korea’s pooq to stream CNN, Cartoon Network | OTT | News | Rapid TV News
By continuing to use this site you consent to the use of cookies on your device as described in our privacy policy unless you have disabled them. You can change your cookie settings at any time but parts of our site will not function correctly without them. [Close] 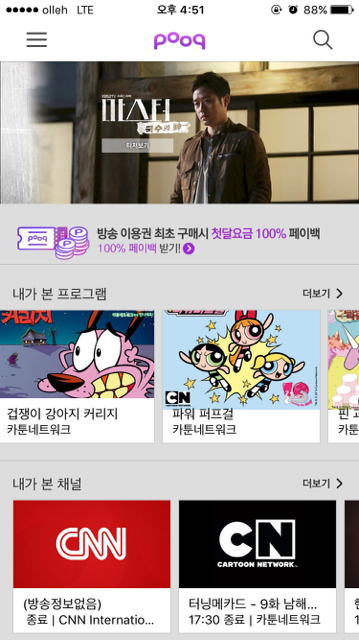 Operated by Content Alliance Platform (CAPTV), the service is a joint venture between KBS, MBC and SBS. Pooq’s full over-the-top (OTT) subscription service is now reaching 400,000 paid users, however those accessing free content will be able to view previews of Turner’s news channel and children’s channel without charge.

“This is the first-of-a-kind launch for us in Korea. To reach an expanded audience via an innovative new service like pooq is an important landmark in making our content available everywhere. Cartoon Network and CNN International are Turner’s international flagship brands and genuine world-class products,” said Phil Nelson, managing director, North Asia, Turner.

Since its launch in 2012, pooq now delivers more than 50 terrestrial and pay-TV channels, 1.7 million VOD titles and 3,500 movies-on-demand. Currently, pooq has a total subscription base of 1.7 million.

Subscribers will be now be able to see air new episodes of The Powerpuff Girls, Ben 10, Adventure Time and We Bare Bears on the Cartoon Network, while CNN International will provide extensive coverage of the US Presidential Election, set to culminate in November.