MoCA 2.5 delivers 2.5Gbps | Infrastructure | News | Rapid TV News
By continuing to use this site you consent to the use of cookies on your device as described in our privacy policy unless you have disabled them. You can change your cookie settings at any time but parts of our site will not function correctly without them. [Close]

The Multimedia over Coax Alliance has approved its newest specification, MoCA 2.5. 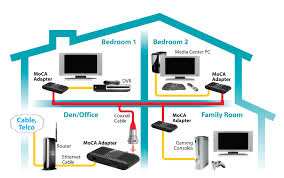 The spec supports speeds up to 2.5Gbps actual data rates, with additional features that address network management and security as required by service providers worldwide. The new specification is backward interoperable with MoCA 2.0 and MoCA 1.1.

“MoCA has once again raised the performance bar for home networking with an increase in throughput that is more than two-and-a-half-times MoCA 2.0, with additional capabilities operators need and end users want. In addition, the technology was delivered in one year, from start to finish, further indicating that the Alliance can quickly respond to the market demands of operators,” said Charles Cerino, president of MoCA. “In MoCA 2.5, service providers have another comprehensive standard from MoCA for building their networks.”

• Management Proxy: management of nodes that don’t have upper layer management support by supporting management queries from one node on behalf of other nodes.

• Enhanced Privacy: secure data communications with additional longer password and using different keys between MoCA 2.5 nodes compared to what MoCA 1.1/MoCA 2.0 nodes use along with the ability to control data forwarding of legacy nodes to and from MoCA 2.5 nodes.

• Network wide Beacon Power: provides better control of peak signal power on the coax by configuring the beacon power of nodes to an absolute number (within tolerance of the hardware) and advertise that absolute number to other nodes so that the same value is used after handoff.

• Bridge detection: ability to distinguish between nodes belonging to different networks and pass proprietary information between nodes before admission, as well as pass that same information to upper layers to prevent neighbours from forming a common network.

The new specification is available to members now.