TV everywhere reaches two-fifths of US pay-TV consumers | Media Analysis | Business | News | Rapid TV News
By continuing to use this site you consent to the use of cookies on your device as described in our privacy policy unless you have disabled them. You can change your cookie settings at any time but parts of our site will not function correctly without them. [Close]

In the face of suggestions that US TV everywhere development is slowing, research from Parks Associates has shown usage of authenticated TV everywhere has grown 22% since 2013. 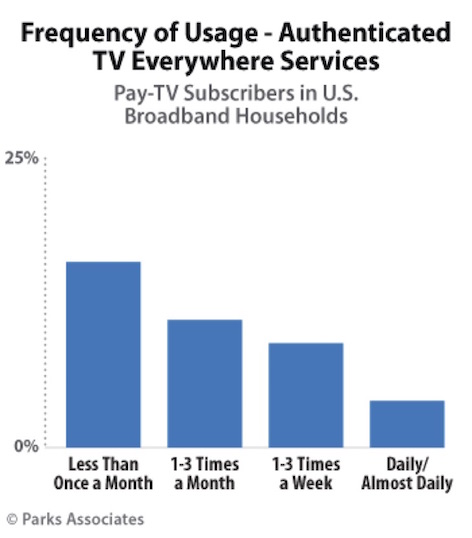 The Entertainment Habits on Connected CE Devices report found that TV everywhere reach among US pay-TV consumers was 40% in 2015, with the percentage of respondents watching authenticated video at least once a month hitting 23%, which said the analyst both broadens and deepens the online video audience for pay-TV providers.

“Content providers have been extremely aggressive in promoting their authenticated catch-up services, which is helping create traction for authenticated TV everywhere services in the digital entertainment household,” said Parks Associates Research Analyst Glenn Hower. “As usage increases, service providers and content companies alike will need to expand their big data capabilities, allowing them to create even more personalised services for their subscribers and viewers.”