UK millennials pose real and present threat to pay-TV providers | OTT | News | Rapid TV News
By continuing to use this site you consent to the use of cookies on your device as described in our privacy policy unless you have disabled them. You can change your cookie settings at any time but parts of our site will not function correctly without them. [Close] 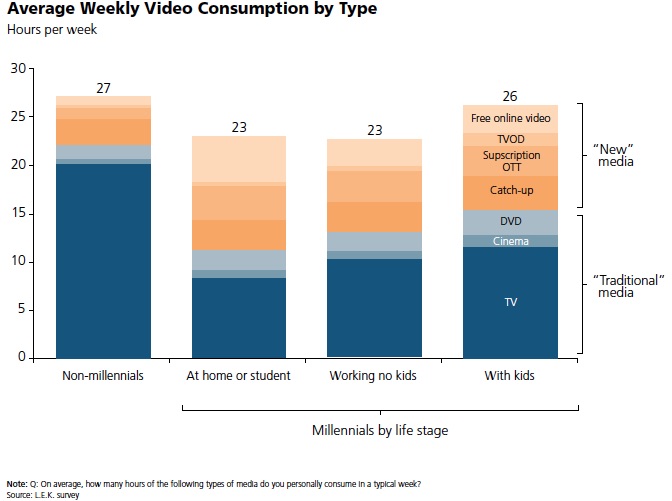 In LEK's analysis — its first in-depth analysis of millennials' life stages from living with their parents to starting their own families — the research firm found that one of the most important challenges comes from millennials' planned reduction in spend on pay-TV and switch to over-the-top (OTT) services like Amazon Prime and Netflix.

The research found that almost three-fifths (56%) of millennials with children and 45% of those pre-family currently have a pay-TV subscription. A similar percentage either have or expect to have an OTT subscription in the next year, with two-thirds of those planning to cancel or reduce their pay-TV spend.

Millennials were found to have spent far less time than non-millennials consuming traditional linear and recorded TV, including pay-TV— ten hours a week versus 20 hours — even though overall video consumption was similar (24, compared with 27 hours per week). The consumption of traditional TV did not increase significantly for millennials with families. This was 12 hours for the millennial cohort, only two hours more than the average.

Millennials did however spend twice as much time as non-millennials on new media, such as online video services (11 versus five hours per week) and social media (seven hours per week versus three), even though both groups spend about the same time consuming all media (54 versus 56 hours per week).

"[The Perennial Millennial report] has shattered the common assumption that once millennials are older and have their own children they revert to more traditional media consumption patterns,” said Martin Pilkington, head of LEK's European Media, Entertainment and Technology practice. “New media companies in the TV industry are rapidly building wallet and mindshare amongst millennials and this is spreading to other generations. Our research findings are a wake-up call to the traditional media players that the change in consumption habits is coming faster and is far more pervasive than they might have thought. Many organisations will need to adapt more rapidly to this fast-emerging new competitive environment."

In the new environment, less than half of millennials' video viewing was on the TV as they showed that they prefer to watch on other devices such as PC, laptops, tablets and mobiles. This was also the case with millennials with families and dropped to 28% for students and flat sharers, but is still only 47% for millennial families versus 74% for non-millennials.

“This new environment will be become tougher for traditional media companies to monetise as the internet brands muscle in more and more,” added Pilkington. “There needs to be far further and faster innovation to develop propositions that capture the interest and behaviour patterns of the millennial generation. In this increasingly ‘on-demand’ world, the quality of content will be more important than ever before. The race is already on; a good illustration of the new dynamic being the very high level of investment in original content by Netflix and Amazon.
Tweet