A third of UK broadband households have an OTT subscription | OTT | News | Rapid TV News
By continuing to use this site you consent to the use of cookies on your device as described in our privacy policy unless you have disabled them. You can change your cookie settings at any time but parts of our site will not function correctly without them. [Close]

A third of UK broadband households have an OTT subscription

Research from Parks Associates has revealed the fast growing nature of the UK over-the-top (OTT) market with 33% of homes in the country taking up such a service at the end of the third quarter of 2015. 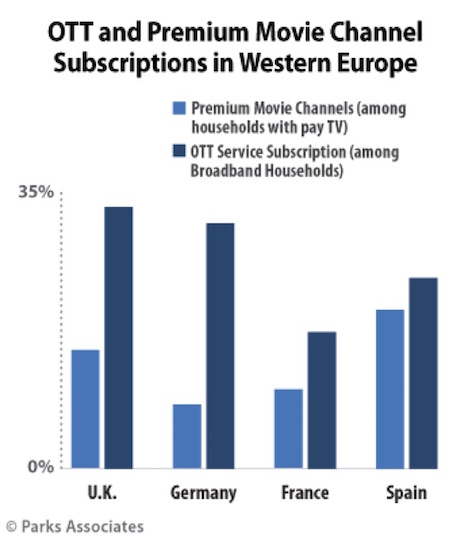 “Overall OTT video usage in the UK favours broadcasters,” said the Parks Director, Research, and Connected Consumer in Europe report author Brett Sappington. “The most popular OTT video sources in the UK include BBC’s iPlayer, ITV Player, All4, and Demand5 – all catch-up or on-demand offerings from broadcasters. New OTT video market entrants, especially those with paid services, will have to provide unique value in order to make substantial gains. However, the demand for interesting content is strong enough that there are market opportunities for new OTT video players. Nearly 20% of UK broadband households have recently used a Netflix service, despite the free OTT catch-up options.”
Tweet