Telefónica takes half of Spain's telecom business | News | Rapid TV News
By continuing to use this site you consent to the use of cookies on your device as described in our privacy policy unless you have disabled them. You can change your cookie settings at any time but parts of our site will not function correctly without them. [Close]

Spain's telecom industry has seen a growth in income, led by Telefónica's Movistar which gathered 45% of business, as well as a rocketing audiovisual sector. 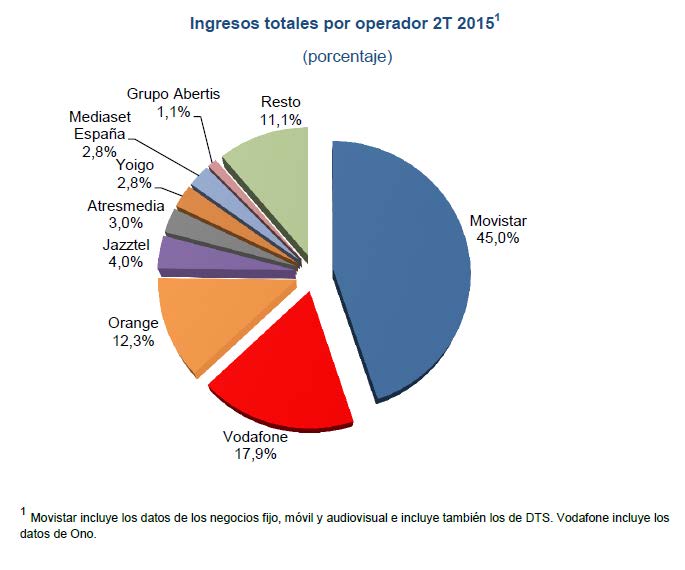 According to figures from the country's telecom authority, the CNMC, the audiovisual industry invoiced €1.11 billion in Q2 2015, 13.8% more than a year before and up for a fifth consecutive quarter. Indeed, the audiovisual business, driven by pay-TV and its 4.97 million subscribers, is the highest growing telecoms service in the country ahead of fixed and mobile broadband.

Regarding operators, Telefónica is the clear player, bringing in 45% of telecoms income. Movistar's market share, which was traditionally large due to it being the former public operator, has increased considerably following the buyout of Canal+.

Vodafone (17.9%) and Orange (12.3%, not including Jazztel), are both strongly pushing convergence and audiovisual services and are the country's second and third largest players.

Fibre services continue to drive growth, pushing IPTV penetration throughout the country - almost one in two TV packages are through IP. However, for the first time in recent quarters, pay-TV didn't show much growth by the end of Q2 2015, partly due to a satellite sector which has dropped over 200,000 subscribers in the last year.