'Dramatic' shifts in broadcast product and services purchases between 2012 and 2014 | Pay-TV | News | Rapid TV News
By continuing to use this site you consent to the use of cookies on your device as described in our privacy policy unless you have disabled them. You can change your cookie settings at any time but parts of our site will not function correctly without them. [Close] 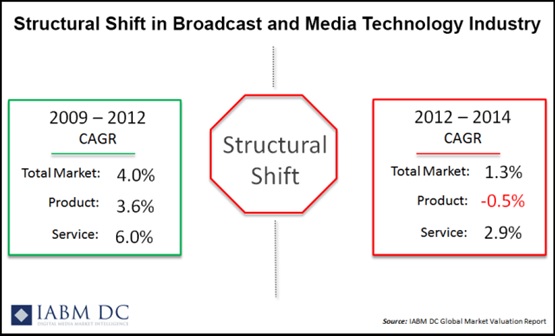 In addition, said report author IABM DC - a joint venture between IABM and Devoncroft Partners - such dramatic shifts are affecting product and supplier choice, and outsourcing. It adds that there is clear evidence of an industry-wide change in buying strategies by media technology end-users such as content creators, broadcasters, pay-TV operators and service providers.

Drawing on data from approximately 3,000 technology vendors and service providers, the 2015 GMVR found that after experiencing a 4% CAGR between 2009 and 2012, the market total for broadcast and media technology products and services slowed considerably between 2012 and 2014, achieving a CAGR of 1.3%.

Revenue from both hardware and software products declined by 0.5% between 2012 and 2014, while revenue from services increased by 2.9%. During 2014, services accounted for approximately $26 billion, or 54% of total spending by broadcast and media technology end-users.

Commenting on the report Peter White, IABM chief executive, said: "Although aggregate industry growth has changed, this is undoubtedly a dynamic time for our industry ... The changing media landscape affecting the demand side of the industry is having repercussions on the supply side as well, requiring a re-thinking of many business models. During this period of 'metamorphosis' there has been a slowdown of investment by end users as they seek a clearer vision of the business model and product roadmap going forward."

"The commercial models of many broadcasters and media companies have changed dramatically," added Devoncroft Partners founder and president Joe Zaller. "The combination new digital and on-line delivery platforms, the shift to a file-based workflows, the increasing need for digital monetisation, and the promise of commercial-off-the-shelf (COTS) IT hardware managed by software-defined networking have been catalysts for an industry-wide rethinking of both what technology is required to support future business goals, and whether it will be purchased or outsourced."

IABM remained confident confidence would remain high in the broadcast and digital media technology market, particularly with the emergence innovations and opportunities that it anticipates will have a positive impact on growth. For his part, Zaller expects the current key commercial development parameters would continue to alter the structure of the industry until 2018 at least.