Strong global TV market props up large-area display market | 4K/UltraHD | News | Rapid TV News
By continuing to use this site you consent to the use of cookies on your device as described in our privacy policy unless you have disabled them. You can change your cookie settings at any time but parts of our site will not function correctly without them. [Close]

Despite IT panel-makers suffering from poor demand and excess inventory in 2014, aggressive procurement by global TV brands have kept TV panel demand high in Q1 2015 says research from IHS. 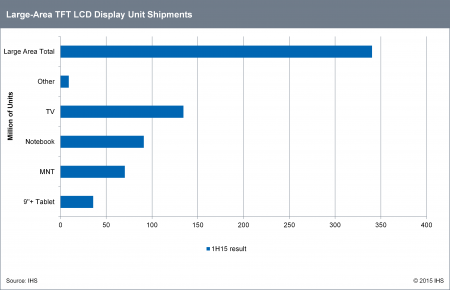 By stark contrast LCD TV panel unit shipments increased by 11% with large-area TFT LCD shipments in terms of area growing 8% year-over-year, to reach 77 million square metres in the first half of 2015. TV panels comprised three-quarters (77%) of all TFT LCD area shipments, but only 39% of unit shipments.

Such a decrease in TV panel demand, will likely weigh on TV panel prices in the second half of 2015, suggested Yoonsung Chung, director of large area display research for IHS Technology. "IT panel-makers suffered from poor demand and excess inventory from last year, while aggressive procurement by global TV brands kept TV panel demand high," Chung noted. "Actual TV sell-in over the first half of this year is still lower than expected, however, due to frozen demand caused by global currency exchange issues."