Millennial viewing to drive LATAM OTT market to $8BN by 2025 | OTT | News | Rapid TV News
By continuing to use this site you consent to the use of cookies on your device as described in our privacy policy unless you have disabled them. You can change your cookie settings at any time but parts of our site will not function correctly without them. [Close]

Millennial viewing to drive LATAM OTT market to $8BN by 2025

The Latin American over-the-top (OTT) market in general is already no country for old men; nor is it going to be the domain of the under-18s until at least 2025, says research from TDG. 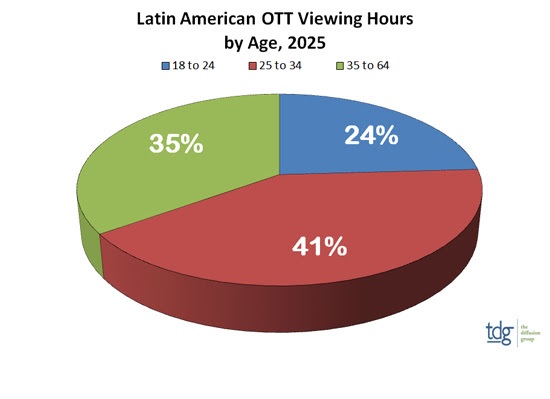 According to the analyst's report El Futuro de TV - OTT Video in Latin America, 2015-2025, the OTT market in Latin America will rise considerably over the next decade, to be worth over $8 billion by 2025, accounting for a quarter of all video viewed in Latin America. Consumers between the ages of 18-34 will be at the vanguard, generating almost two-thirds (65%) of all OTT viewing.

One of the key drivers for this growth will be what TDG calls a 'dramatic' improvement over the last decade in broadband availability, something that the analyst regards as presenting a tremendous opportunity for OTT video services.

"Much is said about the rise of US millennials and the impact they will have on video viewing," said TDG senior analyst and report author Joel Espelien. "But few understand that these same demographic trends are creating tremendous opportunities for OTT vendors in international markets, Latin American in particular."

TDG says that this potential for opportunity has been clearly observed by Netflix, which first entered the Latin American market in 2011 and is now available in 43 countries across the region, investing heavily in original Spanish-language content specifically designed for this emerging market. "The fact that Netflix is expanding its efforts in the region should send a strong message to others that the potential of OTT in Latin America is real and the time for entry is now," Espelien added.

However the report cautioned that OTT video in Latin America also faces inhibiting forces, including poor penetration of fixed broadband, widespread poverty, and the dominance of legacy free-to-air broadcasters.